We ran a young carers camp in Scotland for the siblings of children who suffer from a serious illness/disability. The camp, which took place at Strathallan School in Perth from 7th – 13th July, gave young carers respite from their caring role and time to grow in self-confidence and make new friends.

Over The Wall ran a week-long break in the summer holidays for siblings of children aged 8 - 17 living across Scotland who were experiencing health challenges. Camp took place at Strathallan School in Perth from 7th to 13th July (inclusive). The week revolved around fun and creative activities including an inflatable obstacle course, swimming, archery, Minecraft, lip sync battle, create-a-comic, laser tag, tie dye, graffiti and movie night.

67 young carers came to camp. 56% heard about OTW camps through their hospital, health or care provider, 21% heard about us from another carer, 4% found us online,19% via another charity. Priority was given to young carers who had not attended an OTW camps before and 18% of campers were new to camp. We also prioritised those most in need who had the most to gain from joining us at camp. This was based on a variety of factors including the likelihood of the young carer getting a break in any other setting and psycho-social challenges such as their experience of bullying, isolation and poor mental health. OTW regional and clinical co-ordinators contacted each applicant to assess need and assist them through the recruitment process which took place between November 2018 and March 2019. They also informed our camper wellbeing co-ordinator of any children who required a bespoke camper care plan to ensure their emotional needs were met whilst at camp. In the same period an amazing team of 57 volunteers were recruited and trained to help support the campers during their break.
This camp was a rare opportunity for the young carers to be the full focus of attention, and to let their hair down, leaving behind any worries and responsibilities they were dealing with at home. They were free to give themselves fully to the mischief and magic of camp.

Our Scotland Siblings and Young Carers Camp 2019 was run concurrently, and at the same site as our Scotland Health Challenge Camp 2019. The two camps were completely individual and the children attending the different camps did not mix or do the activities at the same time. This was a new model of delivery for us and we learned several things about operating the camp in this way.

From a budgeting perspective we learnt that by running the two camps simultaneously, we could reduce our overall expenditure on the Scotland Siblings and Young Carers Camp which in turn reduced our cost per camper. This was a positive outcome as Over The Wall is always looking to be as economical as possible with how we spend our donations.

At Over The Wall camps we have a policy that all the children attending camp should be able to take part in all of the activities. If one child is not physically able to do a certain activity, then we do not include it on the programme. Although the Health Challenge Camp and the Siblings and Young Carers Camp were separate, they did share the same site, and contained some siblings across the 2 camps.

At the camps this year we had children who could not take part in climbing and so we did not have this activity available. Feedback from the returning young carers surveyed showed that they did miss the adrenaline fuelled climbing wall, and preferred outdoor activities. We will take this into account when running our programme in 2020, perhaps including more alternative outdoor options if climbing is not a possibility.

In 2019 18% of campers at our Scotland Siblings and Young Carers Camp were new to Over The Wall, however we would like this to increase to nearer 25%. In order to reach out to and engage new families we have started our recruitment period earlier this year, opening applications to camps in October. This should give more time for our marketing team to advertise camps to new parents, as well as more time for new parents to ask questions and go through the application process before the deadline.

How Over The Wall has benefitted from the funding

Thanks to the Creative Breaks funding Over The Wall has been able to embed the Scotland Siblings camp into our programme of work and provide a consistent service for young carers in Scotland which may be relied upon. There has been an increase in the number of referrals from outside agencies in Scotland over the past 12 months which suggests Creative Breaks funding has helped us to build a strong reputation nationally. Having the support of Creative Breaks also reassures other funders, particularly Scottish trusts and foundations, that we are a safe pair of hands.

70 young carers will have enjoyed a fun break from their caring responsibilities at a camp designed to deliver long term benefits as well as short term respite. These include: increased confidence & self-esteem, new coping mechanisms and a better understanding of the need and means to self-care.

67 young carers took part in camp. In our post camp survey 100% of participants said they felt happier after camp. 69% said they felt better able to cope with their worries and challenges because of camp. Camper well-being was at the heart of this camp. Our camper well-being co-ordinator created 15 bespoke well-being plans for children who were identified as having increased well-being needs and was on site to support all the young carers with any social, emotional and behavioural issues during the camp. At the end of each day all campers were encouraged to be open about their feelings and positively focus on their successes during “cabin chat” sessions with their teams.

Lynn Ross' daughter, Elle attended Scotland Siblings and Young Carers Camp in 2019. Lynn saw a dramatic change in behaviour after attending camp. Lynn said: “Elle’s brother Brandon has autism as well as learning and processing disorders and suffers from anxiety and depression, and so he often takes his frustration out on Elle. He sometimes singles her out and picks on her, so Over The Wall really gives her respite from that. Camp really boosted her confidence and increased her independence. It gave her a place she can release, take time out, calm down and just be herself, relax and most of all not worry. Elle absolutely loved camp- so much that, she came back with tears in her eyes.”

70 young carers of siblings with serious illnesses will have enjoyed a fun break from their caring responsibilities at a camp designed to deliver long term benefits as well a short term respite. These young carers will have discovered new interests and have the confidence to pursue them.

Camp offered the young carers attending a wide range of activities, many of which they would not otherwise be likely to access due to time and cost restrictions, such as archery and the inflatable obstacle course. Formal feedback after camp showed that 96% of the young carers both tried new things at camp and felt that they succeeded at them. 93% of those who fed back rated the activities highly (4 or 5 out of 5). We used the Therapeutic Recreation Model in all our activities to challenge campers to succeed, reflect on that success and encourage them to discover their abilities in other areas of life. After taking part in these activities 81% of the young carers at camp felt more confident about trying new things outside of camp.

Taking part in this camp has helped Elle, whose brother has autism as well as learning and processing disorders, make an amazing discovery about her abilities. Her Mum Lyn said: “Arts and crafts activities at camp have had a massive impact on Elle. In fact, the 2019 siblings camp actually made her choose metalwork as an option at school, as she discovered she liked using her hands- now she is enjoying it so much. She’s has made me a hammer and a tea light holder! Elle has difficulty retaining information and has dyslexia, so she struggles with the more academic topics at school, and it was Over The Wall camp that brought this out of her. It made her realise she was actually great with her hands. Thanks to camp and the activities, she will come out of school with better exam results- and has an idea of what she wants to do, and what she is really good at."

70 young carers of sick siblings will have access to a new network of support through new friendships and contacts made at camp. They will feel less isolated and better able to cope.

Making new friends is consistently the thing that campers say they most enjoy about Over The Wall camps and this years’ Scotland Siblings and Young Carers Camp was no exception. All of the campers surveyed reported that they had made friends at camp. Friendship makes a real impact on young carers who can often experience loneliness and isolation. The feedback we received shows that after camp 69% of the campers felt less alone. Camp offered a unique opportunity for young carers to meet others in similar situations and 88% of campers said they met others who understood how they felt. Developing relationships within camp has encouraged many of the young carers to establish their own networks at home with 81% feeling more confident about making new friends outside of camp.

12-year-old Hannah, alongside her brother Daniel, helps to care for her younger sister Sarah who was diagnosed with Acute Lymphoblastic Leukaemia at age 3. Like a lot of the young carers who attend our Siblings Camps Hannah has made some strong friendships and has come away from this year’s camp with a new pen pal. When asked about her experience at camp Hannah said “this experience has been amazing, and I would like to thank anyone who was involved in making it happen. A lot of the time I spend alone but through the week I have obtained more courage to join in with the group.” Hannah’s mum Karen has seen first-hand the positive impact of camp on her children: “Being at camp does wonders for them- it boosts their confidence and helps them meet new friends which they now keep in touch with. It allows them to have time just for them. They need the same break from being a carer that I do.” 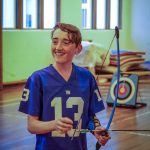