The activities were based in Edinburgh, West Lothian, Fife and the Scottish Borders and were a mix of evening, day and half day activities.

In total 77 individual young carers aged between 7-18 years benefited from a range of 12 activities and outings, full and half day, providing a much needed short break. Some attended more than one activity, with 119 attendances out of 144 invited.

One young carer chose to go to visit grandparents by train, the return train fare paid for by the Creative Breaks grant, from Berwick upon Tweed to Crianlarich.

We arranged an additional trip in May to the Maltings Theatre in Berwick for 2 brothers who missed out on the Easter activity.
6 Summer trips July and August 2018 included, 4th July Harestanes Country Park and climb to Pinelheugh Tower, 6 young carers attended, ages 7-11.

10th July, Arts and Crafts, Mission Hall in Galashiels, 13 young carers attended, aged 7-12. Theme was “Thinking of Others” feeling, exploring & creating models with different craft materials this also included lunch. 9th August, Arts and Crafts at Mission Hall in Galashiels, 13 attended, aged 7-12. Building on the 1st arts and crafts session which was loved by all this was an additional session organised at the request of those attending to further develop skills in painting, drawing, modelling with clay and sewing, lunch was provided.

1st August our grant was able to cover the cost of a minibus to take 8 young carers to the annual Young Carers Festival held this year in Fordell Firs, Fife.

We managed to provide more activities than the 9 in the original application due to what was requested as well as careful budgeting, priority areas addressed were ' choice and control' and 'outreach' as young carers views were gathered in a series of group sessions and more than half live in rural and remote areas.

Project planning and budgeting, it was important to keep an eye on the spend as the project developed and outings and activities were being planned as we found that entrance fees to venues could be very expensive.

We learned that to enjoy a short break and time away it doesn't always have to be expensive and involve additional costs as long as staff time and transport was factored in we could look to do activities that were free or did not cost much.

Targeting those families most in need, we learned that it is important to support families who are unable to have a holiday and to ensure a fair process of selection and be accountable for decisions made.

Strengthen the organisation's reputation locally in the Borders other organisations have been interested to hear what we have been able to achieve by being able to provide short breaks from The Short Breaks Fund, Creative Breaks Programme. Secure other funding as we are always looking at ways to provide a short break/outing/activity we have applied to and have been successful in securing funding £2, 000 for some drama and stained glass workshops via a Youth Accessibility Fund run buy Youth Borders.

Amy, aged 14 cares for her mum who has M.S. and her dad who has mental health issues both are unable to work. Amy has been assessed as a young carer who is providing care at a critical/substantial level. Family life is fraught with arguments and fallouts and the family struggle to resolve the conflict. Amy reports school holidays are an especially difficult time for her. Amy was invited to 3 trips, Christmas cinema outing, Easter trip to Edinburgh Dungeon and Summer trip to Edinburgh and attended them all. She said, ‘I am happiest when I have something to look forward to’.

70 Young carers will be able to engage in leisure and fun activities, giving them time away from their caring responsibilities (time out) with an opportunity to take part in childhood / teenage activities of their choice. 70 Young carers will have received an additional level of support..

The Wellbeing Web assessment tool has provided evidence of increased participation and engagement in planned activities and engagement locally for young carers. Some are now attending local youth clubs or after school clubs.

Jack, aged 10 looks after his mum who is a single parent with a physical disability, he is new to the young carers service and attended the two arts and crafts sessions in the summer. He loved the sessions and was particularly keen to develop skills in sewing and knitting. Staff put in an application for him to Borders Children’s Charity and the application was successful and Jack now attends a weekly knitting class at an after-school club as a way of engaging in age appropriate opportunities in his local area.

70 young carers will receive additional emotional support and `time out` activities to enable them to sustain their current care role and an opportunities to share with other young carers who can provide peer support and understanding.

The Wellbeing Web has measured positive improvements in emotional well-being and sustainability of home placement (measured at the outset, review of care plan (3 months) and closure, there has been positive feedback from young carers, parents and referrers. Through engagement in the short breaks/planned activities and meeting with others in a similar situation peer networks have been developed and have been sustained within community/school setting.

Beth, aged 16 is a young carer from Eyemouth, she looks after her mum who is physically disabled and has mental health problems, her dad is unable to work due to being mum’s main carer. Aware of the Short Breaks Initiative Beth requested help with transport, train fare to go to Crianlarich from Berwick upon Tweed and return to visit her grandparents and extended family in the school holidays. Beth was delighted to be able to go, she travelled by herself and was away for 5 days and said ‘It was great that I was able to see my gran and granddad and my other family, I haven’t seen them for 4 years. My mum just isn’t able to travel, and I didn’t know when I would get to see them again. I needed a break and I feel I’ve had a proper break’. 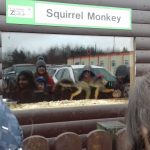