A story by Scottish Huntington's Association

The camp included a range of daytime and evening activities as well as one-to-one and group sessions with Scottish Huntington’s Association Specialist Youth Advisors, on the issues surrounding Huntington’s disease and being a young carer.

What SHAYP Summer Camp 2016 did

Scottish Huntington's Association Youth Project (SHAYP) has worked relentlessly throughout the grant year to organise a bespoke 5 day summer camp for young people living in families affected by Huntington's disease. Along
with 5 SHAYP Staff, 4 additional volunteers were recruited from the Scottish Huntington Association Well-being Volunteer Service and received bespoke training to understand the needs of young people at camp.

SHAYP secured an appropriate venue; organised daytime and evening activities; facilitated the 5 day camp including transport to and from venue; planned and delivered a young persons conference based on the Crystal Maze with zones dedicated to Huntington Disease related topics- SHAYP, Mood, Mind and Movement.

All young people invited were known to the Scottish Huntington Association and living in families affected by Huntington's Disease. Over 190 young people were invited and 43 registered to attend. Due to unforeseen circumstances the final attendee number was 35.

The young people stayed for 5 days from Monday 11th July to Friday 15th July 2016. The summer camp venue was Lagganlia Centre for Outdoor Learning which SHAYP has previously used and is a fantastic venue with an excellent choice of activities including snowboarding, skiing, gorge walking, mountain biking, mountain climbing, archery, high ropes etc to name but a few.

During their break away the young people developed and maintained peer relationship, discussed young carers specific issues and relaxed away from caring responsibilities.

Clara is 8 years old and lives with her mum who is at risk of developing Huntington's Disease and her gran who has Huntington's Disease. Clara's mum is unable to work due to severe mental health difficulties and Clara is often left to care for her Mum and Gran.

Clara has no social activities outwith attending school, has difficulties maintaining peer relationships and is emotionally immature. Through attending camp Clara was paired with a slightly older young person who was her buddy throughout the week and also received one to one sessions with SHAYP staff around topics such as bathing, behaviour, playing and communicating.

Through adopting a nurturing approach it was observed at the end of the week that she was first to volunteer to take part and was chatting away to staff and children alike. Clara described the week of social activities out with her caring role as 'super fun, best time ever' .
Stephen (17) has recently joined SHAYP and was attending his first camp. Steven had only recently found out about his Dad's Huntington's Disease and was trying to learn as much as possible about the illness and how to cope.

Stephen had been exposed to extremely difficult behaviours at home and was struggling to cope with his dad's changes. Whilst at camp Stephen attended the festival and learned more about how Huntington's Disease affects a person through changes to a persons mind, mood and movement.

Stephen also spoke to others in his activity group and bedroom about how they coped at home, along with attending the nightly resilience sessions to improve his coping and relaxation strategies. At the beginning of the week Stephen was incredibly anxious and nervous around leaving Dad and attending camp for the first time.

Throughout the week Stephen relaxed and through enhancing his knowledge about Huntington's Disease he visibly relaxed as he understood that it wasn't only his Dad who behaved in this manner and learned various new techniques to manage the difficult changes.

Stephen described his experience as 'a real eye opener and life changing.....I've learned so much about Huntington's Disease and feel I can manage my dad better'. During follow up sessions after camp Stephen reported that he has implemented many of the relaxation strategies and was generally managing to cope at home better as his knowledge of coping with Dad had improved.
Brian is 14 and carer for his mum and younger sister. Brian has noted that recently his Mum is refusing medication, displaying dangerous behaviours such as leaving home in the middle of the night and generally angry and aggressive to him and his sister.

Brian has been struggling with these behaviours and his metal health has been affected. Brian attended a bespoke session on behavioural changes in Huntington's Disease, along with nightly relaxation and resilience building sessions.

Brian explained after camp that 'the groups helped me to understand the changes in my Mum, her behaviour is difficult but its all part of the illness. I know what to do to help Mum, me and my sister and if I hadn't been at camp I wouldn't have those coping ways'.

What Scottish Huntington's Association has learned

SHAYP has learned that, providing respite opportunities for Huntington's Disease families is integral to a young persons long term coping. Peer Support has a far reaching impact for the young people, especially post camp encouraging new young carers to camp has improved benefits for them and the entire group
Top tips Scottish Huntington's Association's top tips for an organisation that wants to run a similar project

Organisation is paramount. Set a plan of action with deadlines and targets. Ensure you meet all your deadlines.

Ensure you have ample staff support for the duration of camp to support the young people.

Record whilst at camp any issues raised by young people to ensure that these are tackled after camp. 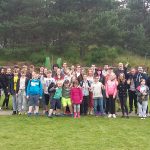