A story by Scottish Huntington's Association

We provided a 5-day summer camp in Aviemore for 50 young people, aged 8 – 25 years old, living in a family affected by Huntington’s Disease.

The camp included a range of daytime and evening activities as well as practical sessions on coping with being a young carer in a Huntington’s Disease family.

What SHAYP Summer Camp 2019 did

SHAYP secured an appropriate venue, organised daytime and evening activities, facilitated the 5 day camp including transport to and from venue, planned and delivered a young persons conference on Huntington's Disease: A Pearl of Wisdom

All young people invited were known to the Scottish Huntington Association and living in families impacted by Huntington Disease. Over 130 young people were invited and 48 attended. The young people stayed for 5 days from Monday 8th July to Friday 12th July 2019. The summer camp venue was Lagganlia Centre for Outdoor Learning which is a fantastic venue with an excellent choice of activities including duckies, white water rafting, skiing, gorge walking, mountain biking, mountain climbing to name but a few.

During their break away the young people developed and maintained peer relationship, discussed young carers specific issues and relaxed away from caring responsibilities.

What Scottish Huntington's Association has learned

SHAYP has learned that, young people in Huntington's Disease families require a break away form their caring role as it is all encompassing, physically and emotionally.
Peer support in managing the condition is integral, especially when the disease progresses and difficult decision have to be made and camp is a fantastic opportunity for young people to have a break away, however ensure that you have adequate numbers of staff who are highly trained

Providing respite opportunities for Huntington Disease families is integral to a young persons long term coping.l Peer support has a far reaching impact for the young people, especially post camp. Encouraging new young carers to camp has improved benefits for them and the entire group.

How Scottish Huntington's Association has benefitted from the funding

Ensuring that cares and the people they care for have improved well-being is of the utmost importance to us. Through attending camp young people have the opportunity to reduce their social isolation, improve their resilience and learn new coping skills. This has a positive impact on well-being.

E is 15 years old and has regularly had thoughts of self harm, periodically acting on these thoughts. E has attended two summer camps and has built up a good friendship and support network over this period. During camp E attended the Festival 'A Pearl of Wisdom' and was provided with a range of coping techniques to consider employing when things became overwhelming. E spoke to the SHAYP staff following this session and asked for further information. Following camp, E spoke to her specialist youth adviser and explained that she had been implementing the coping strategies discussed and was finding that they were making a significant difference to her being able to cope. Furthermore she had explained to her non affected parent about the coping strategies and together they were using them when things were getting emotionally exhausting at home.

48 young people attended camp for 5 days and 100% of participants stated that they thoroughly enjoyed their time at camp and as with similar years they are asking for the camp to be of a longer duration. Through attending camp 100% of participants enjoyed the range of daytime and evening activities that were offered to them with feedback including 'fun', 'amazing', 'relaxing' being used to describe their time at camp.

C is 11 years old and cares for his Mum who has mid stage Huntington's Disease. Mum is extremely cognitively affected by the disease and her parenting is significantly impacted, thus C cares not only for his Mum, but also for his siblings. C is a very empathetic young man and recently has struggled coping with his caring role and Mum's decline. It was felt that camp would be advantageous to C's emotional and mental health to attend, however in the lead up to camp, C became very anxious about leaving Mum and worried about how she would cope. Scottish Huntington's Association ensured that significant support was put in place for Mum and C was accepting of this. It was also agreed that he could call home daily to speak with Mum, if required. Throughout the duration of camp, C changed from a young man with the worries of the world on his shoulders, to a care free and happy young man. C continued to try and care for his siblings during camp, however staff were sensitive to this and supported him to care for himself and allow staff to care for his siblings. Throughout camp C noted that he was missing Mum a lot and was worried about her, but really enjoying his break away and doing lots of fun activities he had never tried before. It was noted by staff that throughout the week, the smile on C's face got bigger as he de-stressed. Overall this opportunity afforded C a break from his caring role and allowed him an opportunity to enjoy life outside of his caring role.

Caring for a family member with Huntington's Disease is incredibly difficult due to the ongoing changes and often volatile nature of the condition. Carers require ongoing support to manage the condition. SHAYP summer camp works to ensure that carers receive training on coping mechanisms to sustain their caring role.

During SHAYP’s festival, ‘A Pearl of Wisdom’, information and advice was provided on research; The Basics; Talking to others about Huntington's Disease and Coping with living in a Huntington's Disease family. 90% of participants rated their coping skills had increased and 98% concluded that their well-being had improved. Overall this indicates that the young carers have support to improve their knowledge to understand the condition, which supports sustaining their caring role. Furthermore through attending camp 100% of those who identify as young carers rated that they had enjoyed their break away from caring and it had given them a renewed energy for returning home to care.

J is 17 years old and cares for her Mum who has has mid stage Huntington's Disease. J's Mum's mental health is affected along with her cognitive capacity and her decision making and judgement are significantly impacted. This has resulted in J worrying about what Mum may do and trying to resolve poor decisions Mum has made, such as deciding to move county without any planning. J has attended camp for 9 years and has reaped the benefits of this break away, along with learning more about Huntington's Disease. Throughout camp J spoke at length to her peers and also to staff about the difficulties at home and she sought the advice of those who had been in similar positions. Upon returning home J was equipped with further knowledge about how to manage her Mum's decline and who she could turn to for support when things became difficult. This was advantageous as following camp mum was involved in an situation which escalated quickly, however J was equipped with the skills and knowledge to manage this situation and seek support for Mum. J reported that before camp she would have worried about what to do, but she had developed a plan with staff and her peers, knew who to contact and how to manage the situation and didn't feel alone in managing the problem. Thus, J feels that she can sustain her caring role. 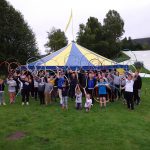