Sit for a Moment

A story by Dochas Centre

We launched a series of 3 x 8 week 1.5 hour Mindfulness sessions for up to 10 carers, helping them to live in the moment and reduce stress.

We also introduced a social afternoon for Carers and they care for to drop in for ‘Tea and a Blether’. This has been a successful activity as people have used the centre to meet up with others for peer support and company.

What Sit for a Moment did

We managed to deliver this in Mid Argyll and Kintyre as a 6 and 8 week course which will be on a rolling programme. This has been so beneficial to most of the Carers who attending and they received a CD and book to help them to continue with their practice. We have had excellent feed back from this.

Our Tea and a Blether drop in has been very successful with carers coming into the centre from the rural areas and using the centre to catch up with other carers this help combat loneliness and isolation.

We encouraged carer A to come along to the 1st course we ran, she resisted but we managed to help with respite and she came along. She socialised with others, she realised that by having some time to herself that it was so beneficial and she started to think about her own health. She reflected on how stressed she was and the impact this had on her mood and ability to cope. She stated that she is in a much better place now and able to continue with her caring role and has a better relationship with her husband, family and friends.
A group of carers started to come along to our Tea and a Blether Group, they appeared to gel together and within a few weeks were phoning each other at home and providing that support that only a carer knows.

The group have taken ownership of the space and know that it is their time to come and have together for fun, support and a blether. This enables them to share experiences and understand each other.
We organised an afternoon tea to Stonefield Castle for our Tea and a Blether Group. We hired a mini bus so they could all travel together. We had a wonderful afternoon tea with cake stands and all the trimmings in the most spectacular setting. We organised live music so the carers could get a wee dance if they wished or they could sit and toe tap.

Everyone agreed that it was a very special day out.

What Dochas Centre has learned

Carers can't do this on their own. By creating the right opportunities people will become involved. Carers health improved by being supported to engage in a life outside caring and having an interest for themselves.
Top tips Dochas Centre's top tips for an organisation that wants to run a similar project

Having a personal approach and being there for the carers when they need us.

Being reliable and keeping the times and dates consistent with what works for them.

Being able to help with respite for the care for. 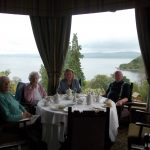