A story by SOAR Youth Projects

The clubs provided young people with independent opportunities to meet up with peers, whilst also providing their carers with regular planned periods of respite throughout the school holidays.

What SOAR SCHOOL HOLIDAY CLUB did

Over the last year we employed 32 staff and 6 volunteers in our school holiday club. 20 staff were existing staff bank members and 12 more were recruited throughout the year from childcare courses in the local college, school and other areas.

We organised activities which young people told us they wanted to do, and ran the club based in Alness Academy, using two minibuses to transport the group to outings elsewhere. We cater for young people of school age and we received referrals from social work, education, health and other voluntary services.

The club offers young people up to two six hour sessions per week during school holiday periods as well as offering transport from central pick up points for those living further afield. The base in Dingwall Academy was used up until the end of Easter 2014 and provided two large rooms with a wide hall attaching them and a small room as well as occasional access to the gym hall. In the Summer of 2014 the club moved to a roomier and less expensive venue in the English Department of Alness Academy which provided four large classrooms a very roomy hall (concourse) area and an enclosed outdoor play area.

A wide variety of play resources are available for young people to use within the venue. In addition a planned activity takes place each day. Families are sent out booking forms around five weeks before the holidays detailing the activities planned each day. They are asked to indicate the days they would like their child to attend and the spaces are allocated out equally between the children over the holiday period.

Young people took part in activities such as horse riding, forest crafts, slot car racing, sensory days, sports days, beach trips, cinema trips, bowling, musical sessions, swimming, etc. We have a strong emphasis on getting out and about in our community and young people were able to try out activities with their friends subtly supported by our staff.

Carers used the respite time SOAR offered to enjoy quality time with other children, get caught up on chores, and to have some quality time to themselves.

What SOAR Youth Projects has learned

We have learned that our desire to avoid having a waiting list, by dividing spaces equally between all families wishing to use the service is not sustainable due to the increasing number of requests for spaces leading to each individual being offered a lower number of sessions per week.

We have learned that providing activity based days for people to choose from allows young people and families greater degree of choice of respite time than providing age based groups.

We have learned the importance of having the right levels of support for individual children sometimes means your budget is stretched and your target figures are not quite reached, but that is okay. 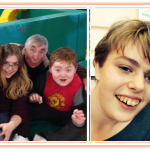