To provide a weekly social club for isolated young adults with additional support needs and challenging behaviour between the ages of 20 and 30 so they can socialise and take part in monthly outings. The social club runs for 50 weeks of the year on Wednesday nights from 6 to 9pm. Club night also provides vital time off for the parent(s) of the young people who all live at home and many of their parent(s) may not be so young themselves or may have their own health issues.

What Social Clubs for young adults with challenging behaviour did

We have run a full programme of weekly activities on Wednesday evenings from 6 to 9pm.

Susan - Due to showing extreme challenging behaviour Club night for Susan is currently the only activity that she attends without her mum who is her full time carer. Mum looks forward so much to Wednesday night as this is her pamper night, she has a soak in a bath then has her hair done – ‘it’s just nice to have some me time’.

This is a very simple pleasure that most people take for granted but for Susan’s mum it is therapy, she can relax and ‘switch off’ safe in the knowledge that Susan is having a great time in a supported and stimulated environment that suits her needs.
Emma – Since leaving college four years ago Emma has been very isolated, not socialising and having very few friends. She would lay in bed until 1pm in the day and spend most of her time on the computer or gaming. Club night has had a huge impact on her life, she has made new friends and looks forward to meeting up every week with them.

She takes part in all the activities and especially enjoys art nights. She has gained in confidence and self esteem and often meets up with her friends to go to the cinema or bowling. Emma’s parents now go out for a meal just the two of them on most club nights, something they haven’t been able to do in a long long time.
Steven - Before joining Orcadia Steven was not accessing any kind of group social activity, when he first came along to the club he was withdrawn and very shy and wouldn’t talk to the other club members. As the weeks went by Steven slowly grew in confidence and started to approach other club members and try to start a conversation, but would become upset when some of them couldn’t understand him as he speaks very fast.

Now he is becoming much more confident and has a few people he sits next to, and when he arrives others are asking how he is doing and giving him high fives. In the last few weeks in particular we have seen a big difference in Steven, he has now integrated well and has been giving ‘good news’ at the end of the night, standing and talking in front of the whole group.
Abbie - initially was very reluctant to join in with group activities due to being very shy and easily embarrassed which led her to misbehave. Abbie was reliant on her mother to travel to and from the Club, which was proving difficult for the family as her Mum also had to bring along Abbie’s younger siblings including the baby. Mum was very keen for Abbie to self travel as her friends all do.

Working together Staff at Orcadia and Mum have now encouraged Abbie to travel independently, this was done gradually from Mum putting Abbie on the bus from home and Orcadia staff escorting Abbie to the bus stop after the Club, always keeping in contact. Abbie has progressed so well that she now travels to Orcadia with her group of friends and last week for the first time she left the Club on her own to get her bus home. As a result of attending the Club Abbie and her fellow Club members have begun to socialise with each other beyond Club hours.

These days they often “go in for” each other on the way to the Club. We have seen a real change in Abbie’s behaviour as she is less anxious. She is far more settled in the Club and with her increased confidence is far more likely to join in with activities than previously, she has particularly flourished with the art projects and works well in the team building projects.

We have tried out a number of different formats for the club night and found what works best is where the young people initially come up with the ideas on what they would like to do or any places they wish to go to. This information is then made in to a 3 month programme a copy of which is given to all the participants.

For the evening there is a planned structure of different activities which the staff consider in advance of the evening. Usually there are around 4-5 different activities which the young adults participate in throughout the course of the evening. As the club takes place over 3 hours there is always a chill-out period where the young people can share a snack together in the café.
Top tips Orcadia Creative Learning Centre's top tips for an organisation that wants to run a similar project

To involve the young people in discussing and deciding what activities they would like to take part in and encourage them to take the lead with the aim of boosting their self confidence.

Be responsive to the different communication needs of the participants and be sure that all staff working with the young people are familiar with their disability and their personality.

Make sure all Club participants and their parent/carers are kept well informed about the different activities the young people will be participating in and the programme of outing and activities. 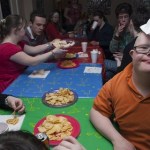