A story by RIG Arts

Superhero Stories was a comic book style art class for young people on the Autistic Spectrum, based in Inverclyde.

The project provided respite for parents and carers, nurtured self esteem, skills and education,furthered aspirations and helped build peer relationships between participants.

What Super Hero Stories did

We ran 98 workshops in total, 2 two hour workshops a week over 49 weeks at our art studio in Inverclyde. The workshops were for young people on the Autistic Spectrum and our two professional artists taught them illustration skills, how to develop characters and story-lines, beginners digital art using iPads and the Procreate app and how to create a graphic novel using this work.

Participants were referred to us by local organisations REACH For Autism, Mind Mosaic and our local NHS' Children and mental Health Services. A few parents also self referred their newly diagnosed children after seeing the workshops advertised on our social media.

The young people were dropped off at our studio for the workshops giving parents and carers respite for two hours. They used this time for themselves to relax or spend important time with other family members or friends. Our two tutors are freelance staff we recruited for the project, one is a published illustrator and the other is experienced in digital art and illustration. Together they have been able to teach the young people a variety of different skills.

As we said before we used iPads and purchased specialised apps Procreate and Animate it! These apps are used by artists worldwide and allowed the young people to experience top technology in digital art which is constantly developing. We also purchased 3D drawing figures so the young people could study shapes and movement so they can realistically draw actions and expressions.

This project reached young people with complex needs and helped them gain independence whilst they transition into adulthood. It worked well by bringing people that are often excluded from mainstream activities together with shared interests , increasing their confidence in communicating with their peers, making friends along the way and finding their 'tribe'.

Unfortunately due to the Coronavirus Pandemic we were unable to host the last week of workshops and have a final exhibition as planned in The Beacon Arts Centre. However the tutors continued to collate and frame the work so that when we come back we can still exhibit at the Beacon or our studio.

What RIG Arts has learned

We have learned that we need to keep reaching out to partner organisations to keep the focus on our project and to attract new attendees. We are also looking at ways to develop a sustainable funding stream to assist this worthwhile service.

How RIG Arts has benefitted from the funding

RIG Arts has benefited from Better Breaks funding through continuing to strengthen partnership links with other third sector and local authority groups which in turn has helped to strengthen our organisations reputation locally.

40 Autistic young people, and their carers, will feedback that the project has helped them to enjoy their free time, build peer relationships and relax as well as improving self confidence and communication skills in a fun social environment.

We helped 33 young people on the Spectrum improve their self-confidence, make friends, develop skills and have fun by facilitating two workshops a week over 49 weeks. Our tutors taught and supported the young people in creating high-quality work both independently and as a team. As their skills developed they started to feel more confident, and the teamwork helped improve their communication skills and allowed them to connect with one another, making friends with similar interests. The young people had their work exhibited at the Galoshans Festival Exhibition in the Tobacco Warehouse which gave them a sense of pride as they showed what they've made off to their families and friends. Throughout the project we got informal feedback from the class and their parents through discussion, we also had the children fill out the Blob Tree at the beginning and end. This showed us visually how much they had improved as their figures were now at the top of the tree with friends.

Quote from CT father of a Super Hero Stories participant. "The comic class has benefited my son as he feels happy to express himself through art. Although very creative he has struggled to go to art groups in the past as he is very particular about what he likes to do and struggles to express himself verbally at times. The children and instructors have helped him to feel settled in a group and to learn new skills. This has given him the opportunity to feel included and not left to feel alone which he often is. An invaluable service for his confidence and our family, thank you!" "

As noted above the young people were able to confidently make friends with like minded peers. It can be difficult for them to maintain relationships as they struggle with communication and often feel excluded from mainstream groups and activities. In the class they felt like they'd found their 'tribe'. Some of the young people have also met up outside of class and continue to develop their friendships. Parents and carers didn't stay for the class so this gave them two hours per workshop to do anything they wanted, Through open discussion with parents this has been invaluable as they have been able to relax, spend time with other family members or friends, or even just run errands they haven't had time for. This has helped decrease frustrations of not having time for everything whilst being a full time carer, overall increasing everyone's wellbeing.

J has been attending the Super Hero Stories Comic book class for the entire year. He settled well into the group and enjoys making mini-comics and drawing new characters on the studios whiteboard. His skills progressed and he is very skilled in creating digital art on the ipads. J's confidence has visibly grown. He feels free to express himself in the group and is now a more vocal contributor to the class, sharing his opinions and ideas with his peers. He is also well supported by his elder brother who attends the class to give him additional encouragement and emotional support. Their parents have commented that Super Hero Stories has helped their sons relationship with each other and has given them a much-needed break for a few hours per week. J's brother's support has been especially important for him as he was diagnosed with a chronic medical condition which was upsetting for him. J had to take a short break because of his illness but he was very keen to get back to the class as soon as he was able which was a testament to how much he enjoys it. He settled in again with no problems and everyone was very glad to see him and his work.

35 carers of young people on the spectrum will have had a chance to enjoy more free time, nurture a better care/life balance and gain more independence as well as more confidence in their child's independence.

35 parents/carers directly benefited from this project as they gained more respite time to enjoy themselves outside of caring. Many of the young people were referred to us by counseling and therapy organisations such as Mind Mosaic who have told us how important it is for these carers to have time for themselves as it can be a rare occurrence. We made sure every carer felt comfortable leaving the young people with our qualified tutors and spoke to them at the start of the project to ease any worries they might have had. This meant they didn't spend any of their respite time worrying and could gain more independence away from their caring duties. Having more of a balance is important for mental health and well-being and transfers over to the whole household. This is the feedback we got from the carers that this benefited not only themselves and the young people but siblings and partners as well.

Quote from G Mc " I am the father of an 11-year-old who has a diagnosis of autism. RIG Arts have provided a haven for my child to attend and it has given my wife and I much needed quality time together for a few hours per week. We know that he is in safe hands and that he will have fun. The workshops have created a calming, creative and inclusive environment which has allowed my son to flourish. We are indebted to the tutors for their mentoring and the time they have devoted to the project. The service provides so much to our family. We have visibly seen his confidence and happiness grow through being involved with the Super Hero Stories project "

35 carers will have improved relationships with their children through improved communication and expression skills developed in the workshops, helping to make easier and support caring role. Carers will feel more confident to rely on local support from the positive experience.

As previously stated allowing the carers to have respite time has improved wellbeing in their lives overall. This have given them confidence in seeking out other workshops and resources that can support them in sustaining their caring role. A few of the young people have also started attending our other workshops 'Arts&Mind' which is a mixed media art class for young people with mental health issues allowing them to express themselves creatively in a fun environment. This has given carers more time for themselves so that when it's time to pick their young person up they feel calm and relaxed. Parents and carers have also told us that communication between themselves and the young people has improved along with the children's self-confidence. This has made their caring role easier and strengthened their relationships.

Quote from parent PL. "Through being involved with RIG Arts we have accessed various other workshops run by RIG Arts and been signposted to other suitable opportunities within Inverclyde that L and ourselves have benefited from i.e. The Belville Community Garden etc. L has always thoroughly enjoyed herself and has got a lot out of her time there. I have enjoyed seeing her work and discussing her creative endeavors and associated stories have been really good and they have brought us closer together even inspiring me to draw! The comic book Superheroes class has been very well organised and allows the kids to be creative and make their own work. We very much hope this class continues as there is not much else for kids on the spectrum locally.

Young people with disabilities have improved their self worth and reduced self stigma. They have found something they're good at and felt pride in seeing their work exhibited. They have felt supported as part of a group and comfortable taking part in teamwork and communicating with their peers.

Parents quote "C has loved coming to the Comic Book class, he is able to express himself much better through his art. He has gained a lot of confidence through hos tutors and being with other children with a similar diagnosis. He looks forward to every class and he works on his projects during the week and is full of ideas that his class tutors encourage with no judgement. He is very proud to show his work at the group and it has really boosted his confidence being with like-minded young people and having his ideas respected!" 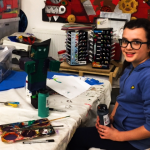