A story by Vocal Carers Hub

As the festive season can be a particularly challenging time for carers, VOCAL offered a range of short break options over the festive period to help carers to cope over the Christmas period.

What Surviving Christmas did

Vocal offered a programme of activities to allow carers to access a range of support during the Christmas and New Year period at venues across Edinburgh and Midlothian. 65 carers benefited from trips involving a hot drink and cake, these were held in various locations including a local church, the Christmas market and Vocal office.

Two Surviving Christmas workshops were held (with recreational and learning elements), bringing 10 carers together to share experiences and to prepare for the festive period, considering how they build in time for themselves and breaks at this challenging time.

Four group trips for carers and for the people they support were facilitated to attend traditional festive activities who feel they miss out on opportunities to take part in these kinds of events. This included two trips to the Edinburgh Christmas Festival with free rides on the Big Wheel (11 carers) and trips to two pantomimes - Beauty and the Beast and Jack and the Beanstork (18 carers).

Two group trips were organised for carers and the people they support that did not have a festive theme for carers who feel that they would like to take some time out from the festive period. These were a trip to Newbattle Abbey in Midlothian and a cinema trip (3 carers). These were less well attended, demonstrating carers did actually enjoy taking part in more festive activities around this time of year.

A SMART meeting for Family and Friends of people using substances was held (4 carers attended). Events in the Carer Centre including Mindfulness and Guided Mediation, a cafe and drop in sessions to play board games, cards and access support. These were attended by 15 carers, with 4 receiving dedicated carer support (over and above general welcome and chat with carers by a paid staff member).

The project was promoted widely amongst our carers via a bespoke leaflet, social media and website as well as via word of mouth through staff working with carers. This was successful in generating considerable interest in the programme in a relatively short space of time.

What Vocal Carers Hub has learned

This project reinforces our knowledge that many carers find Christmas a difficult time and benefit from help to plan and manage Christmas, particularly in light of the general perception that 'Christmas is a great time of year' which can make it feel even more difficult for carers who don't experience Christmas positively or who experience a more intensive caring role due to school or service holidays.

Additionally, carers in financial hardship particularly welcomed the programme of activities with many stating they would not have been able to get involved in such activities in the absence of this service.

How Vocal Carers Hub has benefitted from the funding

Traditionally VOCAL carers Hub has closed for the festive period, but this funding has allowed us to continue offering short breaks to those carers most in need of support at this difficult time. As the service was opened at this time, it make it easier for one of our staff to organise a 'Christmas give away' for those in financial need. This involved arranging toy presents to 24 children and 21 hampers for the household containing food working in conjunction with Cash for Kids.

A carer (48) caring for both her mother and son was able to attend the Edinburgh Christmas Fair and go on the Big Wheel with her son. She stated: 'It was lovely to be included in the Christmas festivities and not have to worry about money.' The carer also reported that it was nice that the short break was flexible enough that they could arrange it themselves at a time that suited them. The outcomes data showed the carer reported an improvement in the following domains, health and well-being, social well-being and economic well-being.

A couple with learning difficulties (who cared for each other) went on both the Christmas Fair outing to the big wheel and coffee and cake event at a local church. This allowed them to spend more time socially with others and had time to speak to other people and felt included in the Christmas activities. Often they feel excluded from such activities and would not necessarily have thought to do these things themselves, so encouragement from a carer support worker enabled them to attend. The feedback from them showed an improvement in social well-being and health and well-being: 'This is a brilliant service'.

Only 40% of carers reported confidence in managing relationships compared to our target of 70% but importantly again, the remainder (60%) reported no deterioration in this outcome.

A carer (45) who cared for her husband with agoraphobia, bi-polar and poor mobility was desperate for a break and wanted to spend time with him out of the home, away from their normal surroundings. The carer was given a free voucher for a local bistro and purchased hot drinks and a cake for them both. In her Wee Break evaluation the carer said “I was so pleased to receive the voucher for the local bistro. My husband and I used our voucher last week and had a lovely, relaxing lunch together with fantastic food at fantastic lunchtime prices. My husband doesn't leave the house much so quality, relaxing, and affordable time together over a nice lunch was priceless to us. My husband was having a difficult day but made the effort to go out and I'm so glad he did. We are so very thankful for our voucher, it truly lifted our spirits” The carer also reported a significant improvement in her and her husband’s confidence, as well as a big improvement in their relationship. 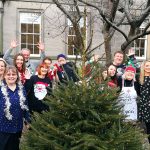