A story by Options In Life

We ran a Recreation Programme for young adults who have autism, communication disorders, learning and other disabilities.

The aim of this social inclusion project, which is fully supported by our staff and volunteers, is to help people make friends, build confidence and self esteem, learn to support each other, work as a team, increase independence and, most of all, have fun in a group environment.

What The Recreation Program did

Our Recreation Programme expanded to accommodate more service users by running an extra day plus two evenings per week. 18 new service users are benefiting from our service. Some are self referrals, others referred by Lynebank Hospital, ENABLE, Fife College, Dundee & Angus College, Social Services and Fife Employability.
Five new part time staff were recruited, on a job share basis.

The programme’s aim is to push boundaries by offering our service users character and team building activities. This past year we have linked up with two new organisations, The Tay & Earn Trust, where our groups have had team exercises in bushcraft, raft building, field archery, rafted canoeing, aqua rolling, kayaking, bee keeping and cobble boating. The Murton Trust, with activities including woodcraft, survival skills, animal handling and running the farm for a day.

The groups have also participated in museum and science centre visits, maritime skills training and sailing, cycling, rock climbing, tubing, go karting and laser tag, to name a few. A new addition, in partnership with Fife College, is our Independent Cookery Course, two evenings per week. The participants have been learning about all aspects of planning, shopping for and cooking a meal, the evening culminating with the “chefs” enjoying their meal together.

Our employability groups have been involved in many projects including work experience at IKEA, in the grounds and castle at Falkland Palace and at Fife Zoo, learning about the environment at the Tay & Earn Trust, glass fusing with 4 Arts, screen printing at DCA, robotics at Dundee & Angus College, First Aid and Food Hygiene courses.

Carers reported a reduction in stress, improved communication, increased independence, a reduction in behavioural issues and general marked improvement in family life. Most importantly carers have gained respite time, and an opportunity to recharge.

Significantly, several of our parents have found fulfilment in volunteering, both with ourselves and other organisations, others have used their respite time to take up hobbies. Some of our parents have become friends and socialise together in their newly found free time.

The mother of one of our service users has been seriously ill and was struggling to cope with his care. From leaving college, he had no services, no contact with peers and, at home with his parents 7 days a week, had become extremely isolated.

He was offered a place, one day a week, on our Recreation Programme which he took to like a duck to water. He is a very sociable and enthusiastic young man, willing to tackle anything and very quickly became one of our team leaders, helping to support the less able service users. In addition, he participated in some of our work experience and training projects and we were able to help him to secure a placement in the grounds of a stately home, where he now volunteers one day a week.

His mother has time now when she can rest and take care of herself, knowing that her son is enjoying himself and making friends. He has become more sociable, more communicative and much less demanding at home. He is also putting his newly acquired skills into practice at home, working in the garden and even tackling cooking and other household chores.
John is young man who has autism and a learning disability. He has come from an unstable, chaotic, and sometimes abusive, family background and has been in care for some time. When he was referred to Options in Life by an occupational therapist, he was suffering from anxiety, low self esteem, a lack of confidence, and a nervousness of being in group or social situations.

He was encouraged to become involved in our work experience projects. Constant re-assurance and lots of support were required to begin with but he quickly became more confident and self assured. He then was then offered a place in our Independent Cookery Classes, where he blossomed and found a real passion for working in the kitchen.

Our support and the experiences we offered have made such a difference to him, that, in September, he was accepted into a full time college placement. We are keeping in touch, and John is coping well. Also, on account of his new found confidence and independence, he is looking to move into his own accommodation in the near future.
David, a young man with a learning disability, lives at home with his parents, an only child with a very small family circle. As is a common story, he had a supported placement on a Life Skills Programme at college, and when that came to an end, he was left with nothing, no friends, no contact with peers and no social life outwith the home.

His parents were doing their best to take him out and involve him activities but he had become very depressed and lonely. David felt worthless and actually told his parents he wished he was dead. The situation was taking its toll on the family and they contacted Options In Life for support. David was offered a place in one of our Recreation Groups. It took a while before he settled and started to feel part of the group but he is quite able and as his confidence increased, he began to take a supporting role with the other service users.

David is a kind person, very empathetic towards others, and is naturally supportive. He now takes a leading role in our team. He has also taken part in some of our training sessions and is currently attending one of our evening cookery courses.

His parents are telling us he is happier than he has been in a long time, full of enthusiasm and confidence. He enjoys showing off his new skills at home even helping to prepare and cook meals, and washing up afterwards. John’s mother has been able to return to work, a few hours a week, which has given her much needed time away from the home and her caring role, and family life in general has improved beyond all expectations.

What Options In Life has learned

The demand for our type of service is increasing. People do not want the more traditional type of 1-1 carer service, and are favouring the peer support model in a group situation, which reduces social isolation and gives young people the opportunity to make friends and enjoy the company of people their own age. By working together and learning to support and help each other, they constantly surprise us, and each other, at what they can achieve by simply encouraging each other and working together.

Sometimes the most unlikely or unexpected people emerge as leaders. It's important to recognise people's strengths and to help them realise their own potential. In the right environment and with discreet encouragement and support, the team spirit emerges in everyone.

The fund has allowed us to offer our services to more young people and to offer new and exciting activities. Our new partnership with the Tay and Earn Trust would not have been possible without Creative Breaks Funding. The activities we have developed together at Willowgate Outdoor Centre have been incredibly successful and have given our service users a host of new learning experiences from bee keeping and the history of salmon fishing, to bushcraft, archery and raft building.

Apart from being educational and character building, these experiences have given the service users something to talk about with their parents and carers, and a sense of pride and achievement.
Top tips Options In Life's top tips for an organisation that wants to run a similar project

Try to make an effort to engage with other organisations, who can work with you to help create new opportunities for the people you support.

Keep looking for new partners and activities, there is so much out there, and people are very willing to offer something different and become involved.

Encourage your service users to try new things which will take them out of their comfort zone and challenge them.

In order to realise their potential, boundaries need to be pushed. With encouragement and support, they will surprise themselves.

Families and carers face many challenges, and life can be difficult and stressful at times.

They generally don't ask for much, just a bit of a break. A day, or even a few hours a week away from their caring role can be enough to make all the difference between coping and struggling. 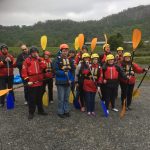