A story by COVEY Befriending

Time Out provided regular friendship and support groups in Lanarkshire for young people who are affected by their siblings’ disability and who often take on a caring role.

Groups lasted two hours and took place in the local community for 8-15 year olds giving them time for themselves.

What Time Out did

Group activities including social outings and topic nights all chosen by the young people who participated. These groups took place in Hamilton and East Kilbride, for young people aged 9-15. Groups were run weekly in blocks of up to 12 weeks taking place in community venues.

Young people were referred to COVEY mostly through education and assessed by COVEY staff. All young people have a sibling who has an additional support need and were supported to have time away from caring responsibilities. Parents had 2/3 hours per week where they could focus on the child with additional needs.

Resources such as craft materials and baking supplies were purchased. We employed sessional workers who provided specialist activities, such as Graffiti Art and Sports/Games. Additional training for staff and volunteers was provided around autism and working in groups.

Outreach, The project has enabled these young carers to be part of a social group locally whilst providing opportunities that may not have been accessible before. Parents have stated how their children are ‘happier’ and are ‘coping better’. Parents have also stated that they see a positive difference in their children’s relationships, with their siblings and peers.

Successes, young people increased in confidence and became comfortable sharing how they felt. Comments like “I like to get away from my family and have fun without caring for my brother’ changed “I love my brother and wouldn’t change him”.

Transport in rural areas proved difficult with staff and volunteers providing this.

What COVEY Befriending has learned

We had opportunity to review the staffing and volunteer levels and adjust the budgets accordingly for the future. We were able very quickly through the commitment of our staff team to continue to develop and deliver the project despite the challenges of the Coordinator being absent.

Strong partnership relationships were quickly built with families, partner agencies and other service providers allowing us to develop a variety of activities.

We learned that the young people were very open to talking about their challenging situations. They have valued the additional therapeutic topic based work provided alongside the social activities already planned.

How COVEY Befriending has benefitted from the funding

This was a new project which we piloted through the Short Breaks funding. This funding enabled us to draw down further funds from The Children’s Lottery and Globals Make Some Noise. This additional funding has allowed continuation and development of this project. Short Break funding has helped us quickly evidence the benefits despite the challenges incurred. New partnerships have been developed through use of community premises, links strengthened with young carer provision in South Lanarkshire and our reputation has been strengthened as we continue to respond to the needs of our community.

20 children in South Lanarkshire who have a caring role in the family feel less isolated and happier within themselves. 30 Parents will feel less stressed.

20 young people and 36 parents/carers in South Lanarkshire have been supported through this service. Building strong and trusting relationships between staff and the young people involved ensured that all those participating in the group, and their families, felt fully supported. Through the use of weekly diaries and group discussion the young people stated that they felt less isolated, having made new friends and shared experiences. This resulted in them feeling happier within themselves and having a more positive attitude towards their sibling and family circumstances. Parents/carers provide consistent feedback and were fully supportive and encouraging of their children being involved.

John was referred to COVEY as he was struggling emotionally to deal with his siblings additional support need. He was becoming aggressive towards his brother at home and had low self esteem. Initially John attended sporadically saying that he was anxious when attending the group. The Group Coordinator worked closely with the family, visiting and spending time with John individually, building rapport and enabling him to feel more confident about attending. Once at the group he was able to open up about his feelings and spoke about why he behaves the way he does when he is upset. John said ‘I don’t hate my brother, like everyone thinks, I just miss him’. John went on explain that he used to enjoy his time with his brother when they were younger, but now his additional needs means that they don’t play together any more. John said that this gave him feelings of anger that he was unable to understand and control. Having identified this issue and after working closely with John, the family and partner agencies he is now fully participating in the group and attends regularly. John now takes lead in the group, looks out for others and is trying harder with his brother.

20 young people who have a sibling with additional needs will have taken part in activities focused on their needs, reporting a welcome break from the responsibilities in their home.

20 young people and 36 parents/carers in South Lanarkshire have been supported through this service. Building strong and trusting relationships between staff and the young people involved ensured that all those participating in the group, and their families, felt fully supported. Through the use of weekly diaries and group discussion the young people stated that they felt less isolated, having made new friends and shared experiences. This resulted in them feeling happier within themselves and having a more positive attitude towards their sibling and family circumstances. Parents/carers provide consistent feedback and were fully supportive and encouraging of their children being involved.

Katie was referred to COVEY as she has twin siblings who both have additional support needs. Due to their needs Katie began to feel socially isolated and had few friends in the community. Katie’s Mum shared that Katie doesn’t get the opportunity to go to activities that other young people her age take for granted, because of the challenges involved in being out with two siblings who have additional needs. Katie has been unable to experienced activities such as going to the park, watching a movie in the cinema or at home or having the chance to socialise and meet new friends. Katie was a nervous and shy young person who had low self esteem and struggled socially as a result of her lack opportunities. Katie came along to the group and spent her the first few weeks at the group, engaging with staff and volunteers, but struggled to engage with the other young people. She became more settled in the group, with staff and volunteers encouraging Katie to take part in the team games and activities until she was initially uncomfortable with. Katie now attends the group on a regular basis, and fully participates. Katie’s has also taken part in group discussions around activities in the group and is comfortable sharing her views and ideas. Katie went along to bowling one night and was so excited stating “I have never been bowling before as it is too noisy for my siblings”. Katie has made new friends whom she now has contact with outside the group. Katie is more confident and now has the opportunity to attend weekly activities that focus on her needs, and not the needs of her siblings.

20 young people will have been able to share about their experiences in a safe and supportive environment. They will be more confident within themselves, feel listened to and have mutual support. 30 parents will feel more supported in helping their family have the breaks that they need.

18 young people and 36 parents/carers benefited from the Time Out Project. During the first block of the group it became apparent that the young people wanted to talk about some of their issues around having a sibling with additional needs. Topic nights were introduced where young people could talk freely about their feelings, thoughts and emotions. Topics covered were emotions, anger management and self-care. This enabled young people to speak openly, feeling listened to in a safe and supportive environment. The group has provided families with regular quality time with other siblings within the home.

Declan was referred to COVEY by the Head Teacher of his school. The Head Teacher felt that his behaviour at school was becoming a concern. They linked this deteriorating in his behaviour to tensions within the family home as a result of Declan’s sibling, who has additional support needs and has recently become very violent. Declan’s Mum spent most of her time caring for his brother. Declan became angry and resentful about his brother and his behaviours, behaviours which were only seen in school. This behaviour resulted in the family live in ‘lock down’ which meant that all windows and doors were locked and Declan couldn’t go out to play or attend any outings. Declan would curse and swear at his sibling and stated that he wished he had a “different brother because he ruins everything “. Through his attendance at the group Declan has met other young people who were experiencing similar tensions at home and he has used this as an opportunity to express his feelings with the other young people, volunteers and staff. Declan is now comfortable talking about his feelings and speaking openly in the group about how he feels about his situation. The increase in his confidence and self esteem resulted in changes to his behaviour both at school and at home. Declan says that he now feels that he is listened to and supported within the group. 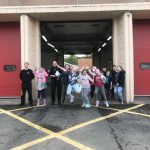