A story by Carers of West Lothian

We provided grants directly to carers who care for an adult over 21 and live in West Lothian.

What Time Out Project did

Carers were invited to complete an application form which they could obtain through our website or by contacting Carers of West Lothian's office. Our details are also held on Shared Care Scotland's Website. Carers were asked to give details of a referee who could verify their caring situation.

As well as advertising on our website, we regularly posted on our Facebook page especially for the Autism funding.

Carer A - looks after his wife who has mental health issues. They have not had a break since she became ill 15 years ago.

Carer stated " Our relationship was very strained getting away and feeling less of a carer and more of a husband. I have enjoyed this break very much. Getting away has eased the strain a great deal". On their break they relaxed, took long walks and went to a show. His wife doesn't like to go anywhere on her own but while on holiday she was so relaxed "she went down to the restaurant herself and spoke to people"
Carer B - a Young Carer who spends a lot of time with his brother who has an acquired brain injury due to a tumour, which has left him with physical and mental health issues. The young carer provides emotional support as well as practical support to his brother.

The family had a weekend break where they were able to find new experiences for both boys to participate in, (sky diving and walking with sharks) The whole family benefited from spending time together away from home doing something exciting. The young carer said "thank you so much for my time out, I had a brilliant time".
Carer C - looks after his wife who has multiple physical disabilities as well suffering from severe depression. The carer and his wife wanted to visit their daughter, who lives in the South of England, as she had just had a new baby.

They were able to visit their new grandson and spend some precious time with him and their daughter. Carer stated "it helped greatly as we could not have asked for a more relaxed and wonderful break in a place we really wanted to be. We both came home happy and blessed" and "time away from the humdrum day to day life. We got a very special first meeting with our grandson"

What Carers of West Lothian has learned

Advertising the fund widely through social media and our website meant that new carers were identified, but also carers who were already known to us but had not previously asked for support identified themselves.

As an organisation being able to offer a short break to carers has made a huge difference to the support we can offer. For the next round we hope to encourage our support workers to help carers use the fund in a more innovative way

We found the Autism specific funding difficult as the group of carers who fit the criteria was limited. We had very little interest in this funding despite using social media and actively talking to carers we knew about who would qualify. Not many carers contacted us directly about this fund, however we did eventually manage to use most of the funding.

We asked for referees to support each application and in reality spent quite a bit of time chasing professionals for references. I would change this next time around and ask the carer to provide a statement from a professional along with their application.
Top tips Carers of West Lothian's top tips for an organisation that wants to run a similar project

Set out your guidelines and make your criteria simple, this should help carers to identify themselves as eligible and hopefully reduce the number of ineligible applications.

Organisation, pre set dates for applications to be received, panels to meet and the outcome to be delivered. This helps carers and workers know when to expect notification.

Keep track of when breaks are meant to be taken, ask for receipts as soon as possible afterwards and send any evaluation forms as well. This will, hopefully reduce the number of carers who don't return their receipts and will provide more meaningful evaluation. 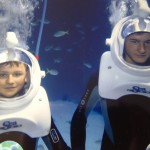