Time to Be Just Us

A story by PKAVS Carers hub

This project allowed PKAVS carers hub a chance to deliver a programme of opportunities for carers of all ages and their cared for so they could spend valuable time together at a range of socially connected events that were delivered throughout Perth & Kinross.

What Time to Be Just Us did

Thankfully the majority of events were delivered prior to lockdown in March. These included:

A Young Carers Christmas Extravaganza that was held in the Station Hotel in Perth on Saturday 7th of December. We have held these events for young carers before but this year’s attendance was above and beyond anything we've had previously. In total 126 young carers, 104 parents and 57 siblings attended the event at some point during the day. The event had a disco, inflatables, face painting, balloon modeller, magician and a Santa's grotto where every child who attended was given a gift.

PKAVS day services are delivered 5 days a week in Perth and 3 days a week in Blairgowrie. These teams delivered 3 Xmas lunches for carers and their cared for at Hotels in their local area. Day services had Xmas lunches with entertainment for 5 days in Perth and 3 days in Blairgowrie for the clients who attend. Each client who attended these were also given a small Xmas hamper.

Weekly visits at both centres by various musicians continued until the services closed in late March. These continued to be very engaging for the clients who took great pleasure in singing along and on occasion getting up to have a dance.
The day services team up until March 2020 had also delivered day trips for clients to places such as Crieff Visitors Centre, Pitlochry and Perth theatres, Dunrobin and Dornoch Castles and they also supported a group of carers and their cared for take time away at a weekend residential break in Dornoch.

The adult carers staff help organise and deliver a Valentine’s Day celebration as well as a Carers Xmas Ceilidh for unpaid adult carers and their cared for. Other activities delivered during up until March 2020 included trips to botanic gardens which included a meal, supported walking groups were the walks were planned so this included stopping at a café so the group could have a pot of tea and some scones.

Other activities included Xmas trips to a jam factory, hand massages, mindfulness lessons, pamper sessions, arts and crafts group trips and more besides.
PKAVS Bridge Project for bereaved carers are included as they were involved in much of the above.

What PKAVS Carers hub has learned

I think we have learned that we may need to be more selective in who can attend. We have a great many carers registered at PKAVS and obviously these events were all pretty much ‘sold out’ so we need to put in place a tier system so that we know that those carers most in need are the ones who would take priority in being invited to these events.

I think we have also learned that there is a big demand for these events and so we need to find a way to try and deliver these in more locations and more regularly. The attendance numbers are positive feedback are good evidence that can be used to other funders including our HSCP to continue to offer us support to develop a programme of similar events on a larger scale.

These events have also showed us that there is still work to be done around promoting PKAVS carers hub in P&K and also raising awareness around carers rights and the support they are entitled to. These events highlighted a number of hidden carers who hadn’t heard of PKAVS or knew that support was available to them. Only through seeing or hearing about the event when it was advertised or in some cases attending the event did these carers know support was available.

Similarly a number of professionals in different localities who saw the events being advertised and contacted us found out a lot more about the number of different ways PKAVS carers hub support unpaid carers of all ages living in P&K. We need to find ways to keep raising awareness of PKAVS and unpaid carers with professionals and hidden carers so more are offered the support they need.

How PKAVS Carers hub has benefitted from the funding

The truth is that without this grant award PKAVS wouldn’t have been able to deliver many of the events that we did simply because there wasn’t the funding available to do so. These events have helped us offer some much needed respite to carers and their cared for. In some cases they have acted as an introduction to PKAVS so carers can then be advised what other support may be available to them. For registered carers it has allowed us a chance to keep in touch with many of them so we can see if their situation has changed and it may be that more support is required. The funding allowed us a chance to deliver some events in areas where these don’t happen as often as they do in other areas. This allowed to work in partnership with both statutory and voluntary services in these localities to help promote these events which helped raise awareness of PKAVS and the carers hub.

Carers and the people they care for will report feeling less stressed and more relaxed in their relationship with each other.

This outcome has been achieved as this funding allowed us to develop and deliver a number of events, trips and activities to unpaid carers living in Perth & Kinross that otherwise would not have been available. The focus of these events was on them being delivered so both the carer and cared for could spend some time together in a fun and relaxed environment whilst also meeting and making new friends and trying new things. The feedback received after each event was universal and said that they had really enjoyed attending and when are we doing it again. Below is a quote from a carer who attended one of the meals which maybe reinforce the impact being able to attend this had on her own mental health and wellbeing:- ' I would not have been able to attend the meal if there was no funding. I am so happy that I was able to attend and feel part of something. I have met other carers that I intend to stay in contact with so thank you for that.'

Ina is a carer for her husband Jim. Both are in their 80’s now and live in a rural area of Perth & Kinross. Ina has been registered at PKAVS carers hub for a number of years now and has accessed some of the supports put in place to support unpaid carers. In and Jim were invited to a Christmas meal PKAVS were delivering through this funding award. There were 20 carers and cared for who lived local to Ina and Jim. The meal was at lunchtime and included all that you’d expect from a Christmas meal. Afterwards some entertainment was put on and many, if not all, the carers and cared for were up dancing at some point in the afternoon. The feedback form which Ina completed at the meal made mention of ‘how nice it was to dress up for something’, ‘ how good it felt to get out of the house and meet other people’, ‘ it was nice just to be Ina and Bob again’ and ‘how kind it was that this meal was offered to both for free as otherwise it may have been difficult to attend’.

Carers and the people they care for will report, through evaluation and feedback, enjoying meaningful activities and have a sense of a life out with their caring relationship.

By delivering a great many events for unpaid carers of all ages who live in Perth & Kinross we feel that this has allowed many more carers and their cared for a chance to get some time away from the 'carer/cared for' relationship. Through accessing these groups friendships and peer support groups have been formed which provides additional support for the carer going forward. This introduction to PKAVS can also ensure that carers and their cared for can also access additional support throughout the year through accessing our Time4Me respite pot, social therapy groups , telephone befriending service, carers cafes, day trips or residential breaks , carers training and showcase events and more besides. This means that the support the carers can access can be so much more than just a one off activity a year but can be much more regular than that. which in turn should greatly help them have a life that is beyond their caring responsibilities.

In December last year we held our Annual Christmas Extravaganza. For one family in particular this event was crucial as this was the only event they managed to attend together as a family during the festive period. Ben and Alice are aged 7 and 5 and live with their Gran and Grandad. Gran suffers from mental health difficulties and mobility issues due to chronic fatigue. The family find it difficult to be able to do activities together due to Grans ill health and Grandad works full time. The extravaganza was held in an accessible venue allowing those with limited mobility to attend. Grans mental health can often be barrier when it comes to attending to events such as the extravaganza but Gran was at ease during the event as the family’s key worker was there to support them and she was familiar with the staff. Both Ben and Alice were able to enjoy a care free afternoon doing taking part in a range of activities that suited them both. Throughout the day the family were visibly enjoying themselves. They were able to have a dance together at the disco, took part in games, got some family snaps in the photo booth, visited Santa in his grotto and enjoyed a buffet lunch together. Gran took one of the staff members aside at the end of the event and thanked them for the day she said ‘This has been such an amazing day and it means so much to us as we never get out to do fun things like this, we have all had a blast. This has taken off so much pressure off of us as without this the kids wouldn’t have got a festive experience or a visit to Santa. It has been great to enjoy a stress free day as a family’.

Carers will feedback that the supported time enjoyed together has prevented carers crisis or breakdown.

The feedback and evaluations completed by carers and their cared for who attended any of the events has been universally positive. I think the best indication that can be given on how well received these events were is how well each event was attended where often there would be a waiting list to attend. One of the biggest recurring themes that was mentioned through the feedback received after each event was the question 'Can we do this again?'. Carers mentioned through this same feedback the positive difference it makes having something in the diary to look forward to which helps break the monotony. As mentioned above accessing these events as an introduction to PKAVS should then lead on to the carer being able to access additional support which it is hoped will reduce the possibility of carers crisis or breakdown. 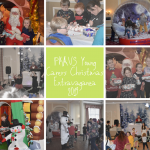