Our Totally YAC Group provided monthly short breaks for Young Adult Carers. They had access to varied and age appropriate activities, offering opportunities for socialising, and meeting others in the same situation.

Giving them a regular break from their caring role within a supportive environment.

What Totally YAC Group did

We planned to run 12 sessions, but actually ran 15 sessions, which took place in a range of different locations. All our activities were for Young Adult Carers who were aged between 16-25. Generally sessions lasted for between 4-6 hours. The exception to this was our trip to Alton Towers which took 24 hrs.

The sessions organised provided a wide range of opportunities to take part in activities to suit everyone, from active activities including Go Ape to a relaxing spa afternoon. Other activities included a trip to Edinburgh to see the Xmas market, go-karting and cinema, as well as attending the Glasgow Comedy Festival. Times and dates of the activities varied to suit the needs of the Young Adult Carers.

We found that the best times for activities tended to be Monday and Thursday evenings. The groups sessions provided opportunities for the Young Adult Carers to meet others in the same situation and to have fun, try new activities and have a well -deserved break from their caring role, hopefully increasing their own confidence through expanding their peer groups and trying out new things.

We have seen a rise in young people struggling with their own mental health and also have many young people whom are unemployed or not in any further education. It was hoped that by reducing their isolation and building resilience amongst the group that they would feel better equipped to deal with challenges such as these.

Martin* cares for his Dad who has cancer, he is often very unwell and Martin has, in the past struggled with this. Martin is 18 years old and left school in the summer and is currently working in retail, this can mean working shifts and long hours. Often he feels overwhelmed and helpless especially in relation to the future.

Like many Young Adult Carers often Martin felt there was no-one he could speak to about his worries or concerns and this had a detrimental impact on his own well being. Martin has attended the short breaks over the last year and has benefited from having others in similar situations to him to talk to. He commented, “Things are much better when you get the chance to have a break and just speak about the things that are bothering you”. This has improved his own well being and allows him the chance to feel less stressed and less isolated.

*not his real name
Alfie* is a carer for his two brothers who have Downs Syndrome, he lives at home with his Mum and sister and has recently left school and is working towards a qualification in social care. Alfie has previously accessed support from our Young Carers Service however has quite a challenging caring role and was anxious about leaving the Young Carers Service. Often he felt like he had limited support from school both in relation to his caring role and his future.

Alfie attended a number of the short break activities over the course of the last year. He said ‘Young Adult Carers has helped me to transition from young carers which has made it less scary as I now know that I still will be supported in my caring role by the Young Adult Carers Worker’.

“The short breaks are amazing, not only do they give me a break from my caring role, there are understanding staff that I can speak to about anything and the chance to try cool new things that I would have never been able to do without them.”

*not his real name
Andy* cares for his Mum who has Sciatica and Arthritis, he is currently at college and struggles with maintaining a social life alongside college and his caring role.

Andy contacted the centre with some queries in relation to the support we could offer and it was quickly identified that group support and the chance to get out and about with people of a similar age in similar situations would really suit him. Previous to this Andy had not informed his college of his caring role or thought to seek any support or advice.

During his time coming along to the activities, Andy has found that he feels more part of the group and asks for support where he previously may not have. “The group lets us feel more included and accepted, we get new activities to try out and meet other young adult carers in the same situation as myself.”

He also likes the time away from his caring role, which helps improve his own wellbeing, “It gives me a couple of hours to myself and not have to worry about anything.”

*not his real name

The fund provided us with a great start to our Young Adult Carers Service, by enabling us to offer an exciting and varied programme of activities. We found that active promotion of the service through partnership working is key to raising awareness of the Totally Young Adult Carers group and of Young Adult Carers in general, who are still very much a hidden group. We are continuing to develop our partnerships in the locality, as we believe this is key to increasing the number of referrals we receive.

An unexpected benefit which has arisen from our Totally Young Adult Carers Group is that our Young Adult Carers started to develop their own informal support networks and friendships, through the use of social media which is evidence that the peer support aspect of the service is working. Indeed, many of them now meet up out with the group.

Be realistic about your numbers, and don’t over estimate.

Consult, consult and consult! It does really make a difference in ensuring successful service delivery.

Develop your partnerships to ensure that you can reach as many of your target audience as possible. 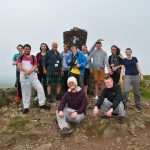