The Rangers Charity Foundation provided unique free football sessions for Visually Impaired young people. We created a positive social environment for both the young people and carers to have fun and/or take a break from their caring role.

What VI Football did

The Rangers Charity Foundation provided bi-weekly football sessions to young people with a visual impairment between the ages of 5-16 years old.

Sessions took place on a Sunday between 12-2pm at Supper Soccer on Scotland Street and are split into 4 key components: individual learning; structured coaching; games and social time. This is a structure we have implemented for many years now and it was been extremely well received by all involved.

The project was hugely impacted by Covid 19 which meant we were only able to deliver 9 of the 18 planned sessions and were unable to complete our 3 planned offsite sessions to raise participation in other areas of the country. Although we were unable to deliver face to face for large periods, we adapted to the needs of the group the best we could.

We created weekly challenge videos and activity work sheets that were sent out on a regular basis. However there was a mixed response to this with some of the young people struggling to engage and parent feedback was that a lot of the young people were extremely isolated during this period.

To further support we increase the amount of contact with parents and participants and worked extremely hard to ensure they had activities were they could stay active. Having the coaches set direct challenges for individual participants definitely got a better buy in than the generic challenges. Feedback from this was very positive - there was a lot of appreciation of the extra lengths we went to to make young people feel supported.

One of the key benefits we have found since starting these sessions 3 years ago was that the parents/carers really enjoy being directly involved in the sessions. Although some choose to spend their break doing other activities, the majority join in the sessions to build stronger bonds with their young person.

Due to Covid we had to change our venue and with restrictions in place parents were unable to take part due to the guidelines in place. This was a disappointment for most however the general feeling was it was better to start back ensure the young people had social contact with others asap.

It was a challenging year but very worthwhile!

Delivering the project during the pandemic has been very challenging. A real area of strength for us has been listening to the parents/carers feedback and delivering what they want/need to support both them and their young people.

Working with other partners including RNIB and the SFA para football network created opportunities to branch out the sessions to other areas in Scotland and to help increase participation in our sessions. Unfortunately this year we were unable to do this but the aim is to have these session as part of next year's delivery.

Our long term venue was closed due to Covid and now looks unlikely to re-open. Finding a suitable alternative that offered the same range of breaks to parents/carers was not possible. However the new venue does have some real positives and different opportunities.

The Rangers Charity Foundation would not be able to run this project and provide support to all who take part without the fantastic support from Better Breaks. Although the amount of delivery had to be reduced, what was delivered could long term be even more beneficial due to everything these families went through this year.

The coaches create a fun upbeat atmosphere that allows for socialising and trying new skills. Young people have developed strong relationships with both their peers and the coaching staff which has helped them in other areas of their lives. 85% of participants have increased their social circle and 78% of parents said that taking part had improved their young person's communication skills.

E (10) attends with his Mum, Mum said: "E really enjoys coming here and being in amongst his peers. It helps him realise that he is not alone with his visual impairment. He has made good friends and just loves it."

The results in this area are hugely positive. Although our ability to deliver the amount of sessions was disturbed, being able to provide the sessions we did has had a really positive impact on creating a break and some enjoyment for both parents and careers. Taking part in the sessions is the only physical activity that many of the young people get out with school. 92% of participants said that taking part increases the amount of physical activity they are involved in.

J (13) attends with his Dad, Dad said: "its been excellent for J, getting him away from his PlayStation and interacting with other kids his age has been great. His confidence has grown and he's much more relaxed now."

It has been an hugely stressful year for most with the lockdown and being unable to do day to day tasks. This particular group of young people were extremely isolated as their disability makes it more challenging for them to socialise. Getting the sessions back up and running was brilliant for the young people to get back doing physical activity and around people their own age. The parents/carers were the driving force behind us getting up and running as quick as we did. There has been a lot of anxiety around from parents around how isolated the young people were, so when session got going it was a weight off the shoulders for most. 100% of parents/carers involved said they felt better supported in the caring role.

E (6) comes to the sessions with his Dad, Dad said: "E coming to the Visually Imapired football with the Rangers Charity has really helped him, its helped his confidence, he had always wanted to do football so its just been great for him to be involved. The coaches have been fantastic they really went above and beyond during lockdown to make sure E still felt involved." 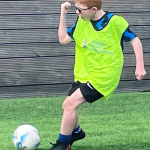