The project provides unique football sessions for Visually Impaired young people that are unable to take part in main stream sessions. It creates a positive social environment for both the young people and carers to have fun and/or take a break from their caring role.

What VI Football did

The sessions run every second Sunday for 2 hours and incorporate the following components: individual learning, structured coaching, games and social time. This format has been developed over a period of time and allows both participants and their parents/carers to make the most of their time with us.
We offered a range of options for the parent/carers to get involved in, however the majority of our parents enjoy taking part in the activity with their young people. This has been a particular highlight for a lot of our participants having something they can take part in and enjoy together.

Our staff are trained to offer specialist support that enable young people of all levels of sight to take part. It can be challenging to accommodate the different levels of sight, age and ability but everyone comes together to ensure that the sessions are safe, fun and active.

We have maintained a strong relationship with the SFA Para Football Network to continue to grow VI Football Scotland wide. This year we supported 3 taster sessions across the country which will hopefully lead to more regular sessions in these areas.

During Covid, young people with visual impairment really struggled to do any form of physical activity and a lot of our participants were very isolated during this time. Getting these sessions up and running again has made a huge difference both socially and on a physical activity level, as many of the alternative activities some people took part in have still not recovered.

The feedback we have received from parents/carers and young people has been extremely heart warming. The impact that the project has made to the families that we work with has been more than we could have imagined.

It can be extremally difficult to coach VI young people due to the vast differences in sight between them all. Getting the parents involved and putting extra challenges on the more able participants has been very positive in create a fun environment for everyone involved. There is not a huge demand for VI football like there is for other disability sports however this makes sessions like this one even more vital as VI young people who do want to engage are often overlooked in other disability sports sessions due to the complexity of their needs. With this in mind the impact that taking part in physical activity is even greater as often it's the only activity that the young people take part in out with school.

We have had similar experiences in our taster session in different areas of the county. Although the numbers are not massive, the participants are extremely grateful and take so much out of it due to there being so little opportunities out there for them. These taster sessions have supported a new session being established in Whitburn with the possibility of regular sessions being developed in both Dundee and Edinburgh.

The Rangers Charity Foundation is extremely grateful for the support from Better Breaks. It has allowed us to grow our disability football opportunities, and links in well with the Everyone Anyone pillar of our strategy. We would not be able to have such a positive impact on the families we work with without this support.

100% of parents/carers said that taking part in the project had both increased their young person's social circle and improved their communication skills. This project out with school is the only social interaction that some of our young people get outside their own household. It has created friend groups and allowed participants to meet others with the same challenges that they have.

E Started attending VI football this year with Carer D who said: “It has been extremely beneficial for E to meet other children/young people who are also visually impaired. It has allowed her to meet other people who enjoy football as much as she does. I’ve listened to her engage in conversations that she would never have engaged in previously.”

Parent/Carers increase their social groups and support network with people in similar circumstances allowing them to share coping mechanisms and feel better supported.

94% of parents/carers said that taking part in the project had helped them feel more supported in their caring role. Bring parents/carers together and providing an outlet for them is a huge part of the project. Most of our parents take part in the activity with the young people and support each other with day to day issues.

E (9) has attended VI football for the last few years. Dad F said: "As a parent I have really enjoyed taking E to the VI football as I have met other parents that are in the same position as myself. The best thing about going is spending time with my son, I think it's great how the coaches get the parents involved in playing."

O (7) started attending the sessions this year. Mum J said: "O doesn’t like going out very often and finding activities that he will attend continuously is very difficult, however the continuity of coming to the camp and the attentiveness of the coaches is working greatly for O." 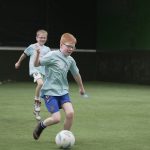