The Watermill Wheelers is a cycling club for cyclists with a disability.  We established a club for children, young adults and their carers in the Highlands and Moray using cycles.

Both adapted and ordinary cycles at the Highland Cycle Ability Centre (Riding for the Disabled using cycles!).

What Watermill Wheelers did

Staff and volunteers came from those already associated with the Watermill Foundation whilst others came from the local community. Word of mouth proved successful initially in recruiting volunteers and local media and social media outlets were also used to advertise for volunteers as well as an open day at the facility in July 2014.

The sessions took place on alternate Saturdays for 2 hours at the purpose-built 1km track at the Highland Cycle Ability Centre where children and young people utilised the resources in a safe, tranquil and traffic-free environment. This included the use of specialised trikes, running bikes, 2-person bikes, recumbent bikes and ordinary 2 wheel cycles.

Carers were also afforded the opportunity to use the resources and many chose to do so as they had never experienced some of the specialised equipment. Others just relaxed in the peaceful environment knowing that the children and young people were perfectly safe and enjoying the sessions. 17 sessions in total were delivered on Saturdays with 16 of these being delivered in 2014.

Established groups such as Cairngorm Sport 4 All and Friends of Autism Highland also participated in the Watermill Wheelers. Unfortunately severe weather necessitated the cancellation of most sessions in 2015, however one session did take place in March. Therefore several Watermill Wheelers and their carers made use of the facilities outwith the standard Saturday sessions and visited the track at other times throughout the year when the weather was more friendly!

New Service Users from St Clements School and Inverness College also became Watermill Wheelers. Watermill Foundation continues to work hard in strengthening its links with the autistic community and aims to build upon the success of the Watermill Wheelers through 2015 and beyond.

Attracting children, young people and carers initially proved successful. However, increasing participation levels can be challenging. Promotional material, use of social media and word of mouth is key.

A particularly severe winter drastically hinders the service provided. Sustainability of the Group from Dec 14 - Mar 15 has been extremely challenging. Offering alternative days/times throughout the winter months may be required (weather dependent of course).

Increasing the Watermill Wheeler sessions to every Saturday is a possibility that is being considered by the Board to maximise track usage whilst affording more opportunities of respite for carers. 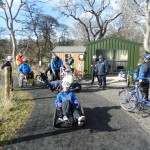