A story by Glasgow Disabled Scouts

We delivered a series of weekend adventures for young people at outdoor centres around Scotland. By providing weekends away with some camping, and some indoors. This allowed young people got to spend time with their friends, build skills for life and gain independence.

What Weekend Short Break Adventures did

We delivered a series of weekend short breaks based at outdoor centres around Scotland, such as Auchengillan Outdoor Centre near Glasgow. Using accessible facilities we hosted small groups of young people alongside a team of volunteers, including young volunteers providing one to one support.

These weekend breaks started on Friday evening and ended on Sunday afternoon. With approximately 6 or 7 young people with disabilities at each camp, and a team of 10 or so volunteers, they are small enough that all young people get a personalised experience.

Activities on offer included adventurous activities such as canoeing, sailing and backwoods skills, as well as some city visits and lots of team building and fun and games. Each programme is tailored to the individual young people.

The project was focussed on providing a weekend of respite for carers rather than working with them directly. We know anecdotally that our breaks are often the only respite families receive, which give them much needed time to focus on other family members including younger siblings.

The project went to plan, although it took longer to get started than anticipated, which meant we didn't deliver as many weekend camps in the initial period. However we were able to extend the grant slightly which allowed us to deliver a week-long camp in rural Perthshire for 40 young people with disabilities - benefiting more than 60 carers.

What Glasgow Disabled Scouts has learned

This project has given us a lot of learning!

We learned a lot about project planning and the difficulty in developing a project to the point where it is ready to launch before funding is confirmed. This is especially challenging in a volunteer-led organisation with no paid staff.

Delivering the programme of activities we offered during the camps we would hope would be learning for other organisations. Our hope is that many, many, many more disabled young people are able to go on adventures but so often these are still seen as inaccessible. We were able to take a group of young people to the top of a mountain, and on a day-long hike, and to the middle of a loch on a sailing boat - and our learning is that there is a huge gap in the market for more activities like this!

The sustainability of projects like this is another key part of learning. This project does not have a natural 'end' point - we aren't setting out to achieve a time-limited outcome, but rather an ongoing need to provide social activities for young people. However finding 'continuity' funding for projects is considerably more difficult than 'start up' funding.

How Glasgow Disabled Scouts has benefitted from the funding

We have benefited enormously from this funding as an organisation. Partly because it allowed us to do the training and development of our volunteer team that we might not otherwise have had the financial resource to do, and partly because it encouraged us to think a bit bigger about our project and reach more young people. This has allowed us to expand our day to day services (opening two new sections as a result of this project) and to pilot a new service for much younger children.

55 young people will have engaged in at least one adventurous short break where they will be supported to fully participate in all the activities, to develop friendships and make new friends all while having fun.

We exceeded this outcome by engaging 62 young people in the weekend camp programme. As well as the number of participants we provided the full one to one support they required.

All young people will have engaged in a programme of activities which improve their wellbeing.

Although anecdotally we know that young people did improve their wellbeing through these camps - based on their own feedback and that of their carers - we were not able to evidence this in as much detail as we hoped. This is a major piece of learning for us on projects of this nature - being able to evaluate change between the two camps was more challenging than we anticipated. However we are confident that young people gained confidence and built resilience and as a result improved their wellbeing.

Through the provision of at least two weekend short breaks per young person carers will have additional respite care and time to focus on their wellbeing. The camps will build young people’s skills for life and independence, supporting them to potentially rely less on their main carer.

Not all young people involved in the project were able to attend two weekend camps for a variety of reasons, but the majority did. Thanks to the grant extension some 40 of the young people were also able to participate in an additional week long camp in the summer. This had a significant impact on the carers because it allowed them to have a holiday themselves, and a week provided the length of respite they rarely get from other organisations. 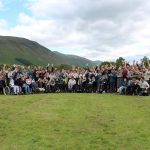