We provided a weekly group for young female, BME carers living within City of Edinburgh. The aim of the project was to access ‘hard-to-reach’ carers from BME communities and give the girls a space to share their experience both as carers and as teenage girls who often feel different from peers.

What Yolo Sistas Project did

From October 2018 to September 2019 we ran a weekly group for 30 sessions, each group session comprised of 3 hours ( 90 hours). The group sessions took place in our group room/kitchen space at Multi Cultural Family Base. We transported some of the the girls to the sessions (Fridays 12.30 pm to 3.30 pm) and dropped them off home after the group.

Eight girls from a wide range of different Black and Minority Ethnic communities attended on a regular basis. Over the year a total of 12 girls attended the sessions. The girls were either referred directly to the project from other agencies or their families were already known to the agency. Over the summer holiday period the group went to several shows at the Edinburgh Fringe Festival.

We placed 4 Social Work students in the group throughout the year. They made valuable contributions as well as taking learning about young BME carers on into their future careers.

The group sessions at MCFB are based on the agency's group work model which offers peer support, shared experiences, respite from caring and opportunities to explore their identities as young BME women. Over the year we partnered with Port of Leith Housing Association ('Window Wonderland'); Tinderbox Orchestra ( song-writing workshops) Cakes for Kids (cake decoration) and Edinburgh Festival Society (free tickets). The group were involved in dancing/ music making, sharing food, arts and crafts activities, self care activities and discussions about topics which are important to the girls.

One girl who left the group started a college course and inspired by the work of the project wants now to work with disadvantaged children and young people.

We have learnt that BME girl's experiences of caring can, in many ways, be different from those of their White, Scottish counterparts. They are not always about providing physical care. For new migrant families they can be about cultural brokering for parents who might be less familiar with the language and cultural norms in Scotland. This can lead to the girls having more responsibility and being 'older then their years' .

We have found that for girls who are relatively new to the country, the group has provided very helpful informal opportunities for the development of confidence in English acquisition and support in settling into a new school setting.

As we are a training agency for social work students the group has experienced 4 different students working with them over the year. This has provided new opportunities to meet young adults who can often act as role models in terms of their involvement in higher education. It has also provided opportunities to deal with issues of change and loss when placements come to an end and people move on.

How Multi-Cultural Family Base has benefitted from the funding

The agency benefitted from Creative Breaks funding in the following ways: It helped us secure funding (on a small scale) from other small trust funds. The work of the project gave these funders an attractive and identifiable goal for their funding. It has built our skills in working with a very ethnically diverse group and what we need to do to accommodate different views, cultural beliefs and languages. It keeps us better informed of the needs of young BME carers and allows us to provide a service to an under-represented group within BME communities.

12 young female BME carers who live in Edinburgh will feel more confident, have improved peer relationships and be more able to explore and articulate their feelings.

10 young female carers became more confident, developed better peer relationships and became more at ease in expressing their views, feelings and difficulties. 2 of the girls who joined the group just after the summer holidays will need more support in improving their spoken English and confidence in participating in a multi-ethnic group. These outcomes are important and can be achieved through a small therapeutic group. The group gives opportunities for peer feedback, provides a forum for testing out opinions, friendship building and gives informal and fun opportunities to develop confidence in spoken English.

Hiba is a 13 year old Sudanese girl who joined the group at the start of 2019. She cares for her mother who has a long term, chronic health condition that requires frequent hospitalisation. When she started the group we noted that she tended to be slightly aloof and distant from the other young women. She did not have many friends at school. She might have appeared to be rather egocentric, although this was probably the result of her social isolation. Over time she has become a much more active contributor in the group. She now expresses more concern for her fellow members, listens attentively to their stories, concerns and feelings. She is more relaxed in her presentation, smiling and laughing more readily. Hiba will ask after other girls if they are absent from the group and she has formed a strong bond with another girl. Although she still finds it difficult to talk about her mother's health condition she will talk about her other family members such as her dad and siblings. Her guidance teacher notes that she is slowly building up a circle of friends at school.

All of the 12 young women who attended the group have tried new experiences. This has included taking part in dance and music workshops, trying out new food, attending festival performances and using different modes of transport (bus, train). 10 of the young women have developed the confidence to go to other venues and are more prepared to join in activities within their school or wider community. 2 of the older girls have taken on the role of mentors for the newer, younger girls who joined the group both before and after the summer holidays. All of these outcomes are important and significant as BME young carers are not only isolated by their caring responsibilities but also because of their family's social isolation, cultural beliefs, experiences of racism, language barriers and poverty. This restricts the girl's ability to try new experiences and go to places which might be taken for granted by young people from the majority community.

Aanya is a 15 year old Bengali girl. Within her family she has caring responsibilities for her younger siblings, one of whom has a learning disability. She also acts as a 'cultural broker' for her family- translating letters for her mother and father. When her mother returns to Bangladesh to visit her family, Aanya's responsibilities increase as she has to take on an increased role within the family household with her father and younger siblings. Aanya has attended the group for 9 months. The group has given her opportunities to engage in several different and new experiences. In the early stages of her involvement in the project she had not travelled by train before, eaten certain foods or expressed herself openly in the context of a group. The group has given her opportunities to achieve all of these things. Recently she has volunteered to address issues of racism in her school through discussions with the head teacher. She has also been in discussion with her local MP about discrimination in the local community, raising issues of harassment from people in the neighbourhood towards her and her family. She has also been involved in demonstrations regarding climate change. The growth in her politicisation is testimony to the growth in her confidence, sense of self-worth and her willingness to participate in community life. She is one of the older members of the group and acts as a peer mentor, as she encourages the new members of the group to try new things in the group. She appears more and more confident giving advice to other girls regarding friendships, bullying, school, online safety, racism etc.

2 different organisations became more aware of the needs of young BME carers. These included secondary schools ( through our contact with guidance teachers and attendance at Young People's Planning Meetings) and lectures for social work students at Stirling and Edinburgh Universities.

We worked with a 13 year old Syrian girl who had caring responsibilities for several family members, including her mother who had diabetes and a younger brother who had a physical disability. All of the family members had experienced traumatic situations because of the conflict in Syria and life in refugee camps in Lebanon. The young woman experienced challenges when she made the transition to secondary school. She struggled with the range of class subjects and started to miss classes. She also on a number of occasions got into conflict with peers. Initially the school guidance staff saw her behaviour as problematic. We liaised with them and attended several YPPMs, briefing staff about the family circumstances and the additional pressures and expectations on this young women. We advocated for more in school support for her and suggested ways that the curriculum could be adapted to her needs. She is now much more settled in school and her guidance teacher appears to be more attuned to her needs. 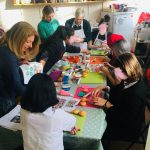