Our project supported young carers aged 5 -15 throughout Perth and Kinross, allowing them to have a break from their caring role during the school holiday period. This included day trips, a short break and a Christmas Extravaganza.

What Young Carers 'Me Time' did

We ran a total of 16 day trips (4 in April break, 12 in summer) which were attended by 255 young carers. These trips included ice-skating, an outdoor activity centre, bowling, the beach, horse riding and wall climbing.

We also ran a residential break during the April holidays where 12 young carers enjoyed a week long break from their caring role, while gaining independence, confidence and self-esteem. These young carers were identified as being those whose caring role was having a significant impact on them, and needed a chance to revitalise in order to sustain their caring role.

Although this residential was initially planned for the summer months, we ran it earlier than planned with a different service provider which meant 4 less young carers were able to attend this break. This was a compromise we were willing to make given the quality of activities and support available on the residential we attended.

The Christmas Extravaganza which we held in December was an extremely popular family event; we had over 140 people attend with almost 100 being young carers. Feedback from families highlighted how important this event was, as parents felt they were making positive memories for their children at a time which is usually stressful. This event was open to all young carers and families who we support.

With the ever increasing number of young carers attending the service we recruited sessional members of staff who were able to assist with delivering these trips. This has meant we were able to offer places to everyone who wanted to attend as we had enough staff to cover.

We have learned through this project the huge benefit of reaching out to non-engaging families. As Perth and Kinross has many rural towns and villages we have families living in these rural locations who were not engaging with the service, however these opportunities have allowed us to reach out to them and get them involved with the service. This has been followed by more engagement from the families which in turn has led to more support for the young carer being put in place.

We have also seen the huge benefits of partnership working. We were able to deliver a residential in partnership with another charity which allowed us all to work together for the benefits of the young carers. Should we have tried to deliver this on our own the experience the young carers would have had would be nowhere near as valuable an experience and would not have gained the skills they did.

The funding has allowed us to engage with previously non-engaging families by offering support to isolated young carers. We have therefore been able to continue to engage with these families and ensure support is available to the young carer in the form they need it. This has also allowed us to look at whether we need to expand our services to other rural areas in Perth and Kinross something we hope to be able to do in the next year. We also now have a partnership with the charity Hopscotch, which will hopefully allow us to continue to work together in the future to deliver services to our young carers.

Connor* is 11 and is the oldest of 4 children helping care for mum who has severe physical disabilities as well as managing depression. Connor for the last couple of years has really struggled with anxiety, which mainly stems for worrying about if mum would be okay without him. He has had episodes of severely low mood combined with no motivation, indicating signs of depression. He had always wanted to visit a theme park but due to his mums condition and financial restrictions this is not something the family have been in the position to do. Connor was invited to take part in our day trip activities, as one was to M&Ds theme park, and spent a lot of 1:1 time with his key worker leading up to this in order to gain confidence. On attending the trip he was introduced to other boys his age, who he spent the whole day with going on the rides. Connor was visibly happier throughout the day and has since also attended another day trip to the local climbing centre. Mum has also reported that he is much happier within himself at home, which in turn has reduced her stress and anxiety as she was so worried about the impact her health was having on him.

Young carers will feel less isolated & have access to respite opportunities that they were involved in planning.

Kevin* is a secondary carer for his brother who has ASD, global developmental delay and hypermobility. He lives within rural Perthshire with his brother and mum, who is the main carer. As result of the caring role Kevin has, he has constant stomach pain which is stress related and a stammer which he has been receiving speech and language support for for the last 18 months. Kevin has experienced bullying as a result of his stammer, and his brothers condition, as they are both in the same small rural school. Kevin was supported to attend our rural respite group in Blairgowrie, where he built a small support network of friends who were in a similar situation to him. This made him feel less isolated as he realised he wasn’t the only one with a sibling who had additional support needs in his local area. Kevin was then offered a place on our residential where along with 11 other young carers he enjoyed a week away from home. This was his first time away from his mum and brother and he experienced severe homesickness, however once he had overcome this he thoroughly enjoyed his break. He made some strong friendships with the other boys, where he was able to open up about his home situation and get peer support from them. He also gained a huge amount of confidence and self-esteem by trying new activities he had never tried before, such as horse riding, and gained independence by being away from home. On return, Kevin’s mum reported that his stammer had dramatically improved, he had not complained of any stomach pain and had been looking forward to going back to school. Having access to this type of respite opportunity has had a huge positive impact on Kevin’s confidence.

Young carers will benefit from peer support and an opportunity to make friends whilst attending these respite opportunities.

Iona* attended the residential break in April having had very little involvement with the service prior. She cares for her twin sister who has ADHD and ASD and spends all her time outside of school with her, and is extremely socially isolated. While on the residential Iona was supported to make friends and as a result has built some positive relationships with her peers. Iona has also been supported to continue to maintain these friendships by attending the respite groups and day trip activities, something that she had previously found extremely difficult. The family situation meant that mum couldn’t get Iona to the groups or day trips but we have worked together to offer transport. As the family are also in financial hardship having days out are extremely rare, therefore having access to these day trips has meant that Iona has had similar opportunities to her peers 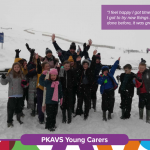