We support young carers in Perth and Kinross aged 5 to 16 to receive fortnightly respite to ensure they get a break from their caring role. We run a Creative Kids group which focuses on support with homework, creative activities and reducing social isolation.

As previously stated in the six month report there was a change in staff - Katie Marshall took the post up from May 1st.

As part of the respite programme we deliver fortnightly respite groups for different age groups of young carers; 5-8, 9-11 and 12-15 years old. This allows us to offer age specific activities and support on a regular basis.

These groups run on Wednesday and Thursday's from 6pm - 8pm. As mentioned in our 6 month review we now also run a fortnightly rural outreach group in Blairgowrie. The first hour of these groups are set aside for homework and allows young carers to complete any homework or studying they may have in a quiet environment with the support of staff and volunteers. The second hour allows the young carers to take part in a variety of different creative activities while developing friendships and learning new skills.

On average 35 young carers attend each of the respite groups. Each of the 4 groups meets fortnightly (twice per month) for 2 hours which equates to 560 hours of respite per month, 5,040 hours over 40 weeks in the last year.

During the first consultation the individuals at the groups highlighted the different and new activities they would like to try, including dance and drama workshops. A local theatre company were contacted and agreed to run drama workshops for the young carers. This allowed individuals to build confidence, have the opportunity to express themselves in a creative way and to learn and develop new skills. A lot of the young carers had not had the opportunity to explore drama in this way and seemed to get a lot from the workshops.

Other activities the young carers have taken part in through the Creative Kids groups include jewellery making which was facilitated by one of our volunteers, precious metal clay modelling and various art activities such as printing.

Ailsa is 14 years old and joined the service in June. She primarily cares for her mum who has recently suffered a stroke and as a result has enduring mental health problems. Ailsa is the second oldest child in her family of six, so she also helps in the house to support and look after her younger siblings.

While completing a support plan with Ailsa she made me aware she gets stressed very easily which leads to her having tearful and sometimes angry outbursts. She explained this was due to the high caring role she has for not only her mum, but also her siblings and is always worrying about what she has to do, particularly finding time to complete her homework.

Coming along to the Creative Kids Groups has allowed Ailsa to complete her homework in a quiet and supportive setting. She feels just knowing she has the opportunity has alleviated some of the stress she felt. She has also found the groups beneficial as she met other young carers her age and has built up relationships with them to discuss her stress and worries - Ailsa now feels she has a support network outwith the service. Ailsa's father reports that he has noted that she seems better able to deal with situations when they arise and has had less emotional outbursts since joining the Creative Kids Project.
Sally is 12 years old and cares for her father who has oesteoarthritis resulting in chronic lower back pain. Sarah has a high caring role and takes on a lot of the household duties. She also supports her father emotionally as he has recently been diagnosed with severe depression.

Sally's family were struck by grief earlier in the year when their oldest child committed suicide. Sally became very isolated and protective of her family. Since attending the Creative Kids Groups Sally has met many new friends and had the opportunity to try new activities which has had a huge benefit to her social skills. Her self-esteem and confidence has also improved and she is now confident enough to discuss her recent bereavement.

A referral was made to CRUSE Bereavement Scotland to support Sally by her key worker. Sally has befriended another two young carers from the service and regularly meets with them outside of the service and feels this is a good support network for her to take part in activities such as swimming.
'Mark' aged 14 has a very high caring role for his young brother 'Morgan' who suffers from various health issues including Down Syndrome, childhood arthritis and cardiac complications. Morgan is constantly in and out of the hospital due to the impact of his health issues and now has an oxygen machine at home to help him breathe through the night. This machine is very noisy and as Mark and Morgan share a room it has meant Mark is often tired because of the noise of the machine. Mark worries a lot about Morgan and finds school work difficult as a result of this. Mark suffers from low-self esteem and confidence and struggles to make new friends.

Since coming along to Creative Kids Mark has been able to form some close friendships which have allowed him to express how he is feeling to his friends which he says helps him to contain his feelings of stress and anxiety when at home especially around his brother Morgan. Mark has also been able to meet these new friends outwith the service which has given him more respite time and in turn has helped him to feel better able to cope with the demands of his caring role and well as with the emotional impact it has on him because he worries so much about Morgan and his serious health problems.

The grant received from the fund has made a huge difference to the service in the last year. It has allowed a member of staff to be funded full time and continue the successful running of the Creative Kids Project as well as completing generic support duties including assessments.

The Young Carers Service since January 2014 has had a record number of referrals - 154 to date. The highest number the service had received in any previous calendar year was 91. Referrals to the service can come through many channels, e.g. social work, education, self or other organizations. We have found that the majority of referrals we have received this year have been assessed as requiring our highest level of support, and on occasions the families are at crisis point. This has put an added pressure on the service to ensure all young carers at red level support have access to respite opportunities, hence the importance of the Creative Kids Project.

Although we made the decision in April to split the primary group to manage numbers and do age specific activities, we have found that with the number of referrals the group numbers are increasing to near the same as what they were before the split. We have also found that splitting the primary group has encouraged some young carers who were previously not engaging to attend respite groups.

Since the rural group in Blairgowrie has been established it has been very successful. We have on average 23 young carers attending each fortnight, and this number is steadily growing. We have found that having the Creative Kids Project delivered in a rural location has not only raised awareness of the young carers service which has lead to a increase in referrals from these areas, but has also helped young carers get much needed respite which they were missing out on previously due to transport issues.

From this we have learned the value of making our service available in rural locations, and plan to develop further rural outreach groups in Perth and Kinross. This has allowed the service to attract new young carers who live in previously hard to reach, rural locations.

One of the challenges we have faced over the last 12 months is decreasing numbers attending our secondary school respite groups. Although on average 25 young carers attend each fortnight, the average age of the young carers attending this group is 13. We have found that since the summer holidays a large amount of the young carers aged 14 and 15 have not engaged in the respite groups. In order to get around this issue we are working with the Young Adult Carers support worker in developing a transition group aimed at young carers aged 14 and 15. This group will still have 1 hour set time for young carers to complete homework in a supportive environment, and will spend the second hour doing creative activities. However it is hoped that by reducing numbers and doing more age specific activities more young carers in this age range will engage with the service. This will also hopefully ease the transition for these young carers into the young adult carers service.
Top tips PKAVS Young Carers Service's top tips for an organisation that wants to run a similar project

Have regular consultations and involve young carers in the planning of all activities. This ensures the respite groups are tailored to what the young people want to do and empowers them to make decisions about their respite groups.

Have an age appropriate incentive for the young carers to bring their homework, such as a reward chart or token system to ensure the success of the Creative Kids group. 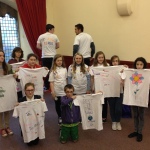